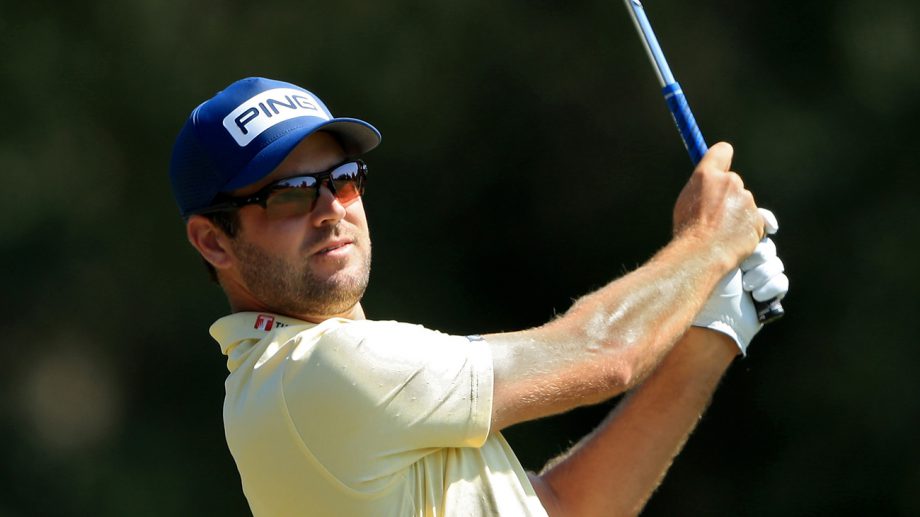 Sergio Garcia squeezed his eyes shut on the 18th green, not as he stood over his putt but when he saw it stop one turn short of dropping for another birdie.

No matter. He played bogey-free Saturday in the Sanderson Farms Championship for a 6-under 66, and he was tied for the lead in his debut at the Country Club of Jackson.

Cameron Davis set the target early when the Australian opened with five straight birdies and then hit fairway metal to 10 feet for eagle on the par-5 14th, carrying him to a 9-under 63. He was the first to post at 14-under 202, a lead that held until Garcia caught him, and J.T. Poston made a 12-foot par save on the final hole for a 69 to join them.

Garcia is getting plenty of attention for putting with his eyes closed, something he says he has done frequently in practice and at tournaments, including his 2017 victory in the Masters.

He also is enjoying himself, even when putts that look like they’re going in stay out.

“We love to make every putt we look at _ or not look at, in this case _ but we know that’s not going to happen,” Garcia said. “At the end of the day, if I can leave the course feeling like I’ve given it my best chance _ like I did today _ that’s all I can do.”

He might need to make everything on Sunday in what figures to be a horse race, with 10 players separated by four shots on a course renowned for its pure, fast greens.

Poston reached 15 under with a two-putt birdie on the 14th and a pitch from the rough to 4 feet on the reachable par-4 15th. But he was too steep on a bunker shot on the 16th, coming up 30 feet short and leading to bogey. Poston stayed in a tie by saving par from a bunker on the 18th with a 12-foot putt for a 69.

“Three guys tied for the lead and a bunch of guys right behind us, so I think you’re going to have to go shoot something pretty low because out of that group somebody is going to shoot probably 6, 7 under I would guess, maybe even lower,” Poston said. “I think it’ll still take a good score, so my mindset will still be trying to make a bunch of birdies.”

Brandt Snedeker, looking confident with that pop of a putting stroke, shot a 67 and was one shot behind along with Kristoffer Ventura, the former Oklahoma State start from Norway who had a 68.

For Keegan Bradley, it was a battle. Staked to a two-shot lead going into the weekend, he had three bogeys on the front nine before he hit a hybrid from 255 yards to 15 feet for an egle on the 11th hole. He finished with seven pars for a 73, though he was very much in the picture.

Corey Conners of Listowel, Ont., is the top Canadian following a 3-under 69 that got him to 10 under. Roger Sloan, from Merritt, B.C., is 7 under after a 71, while Michael Gligic of Burlington, Ont., slipped to 3 under after firing a 3-over 75.

Garcia is trying to extend a streak in which he has won somewhere around the world each of the last nine years dating to 2011, which also was the last time he was outside the top 50 in the world. Garcia slipped out to No. 51 this week and decided to play the Sanderson Farms Championship for the first time.

Not since that 2017 Masters has he had at least a share of the 54-hole lead on the PGA Tour.

“Just believing in myself, trusting myself. That’s what I have to do tomorrow, too,” Garcia said. “Obviously Sunday it’s always a little bit more difficult, but I’ve got to go out there and go through the same routine and just go with it, even if you stumble a little bit early on or something like that. Just believe that what you’re doing is right, and that’s what I’m going to try to do.”

Charley Hoffman had a 72 and was four shots behind along with Tyler McCumber, a runner-up last week in the Dominican Republic, who shot 66 to get back in the picture for a final round that figures to be wide open.