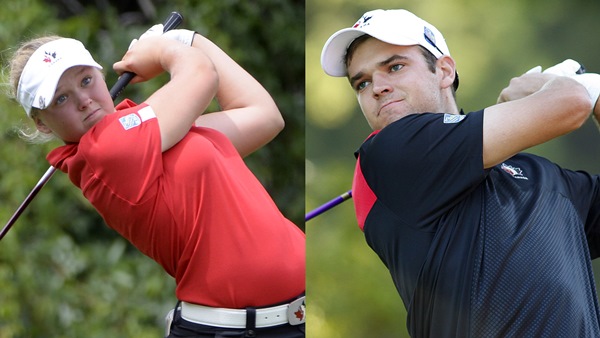 OAKVILLE, Ont. – Corey Conners of Listowel, Ont., and Brooke Henderson of Smiths Falls, Ont., have been recognized as Canada’s top male and female amateur golfers as Golf Canada announced the final standings on the 2013 National Order of Merit, presented by Under Armour.

On the men’s side, Conners, a member of Team Canada’s National Squad, is one of Canada’s top ranked amateur golfers at No. 41 in the World Amateur Golf Rankings. Conners’ breakout season was highlighted by a second place finish at the Canadian Men’s Amateur Championship and semi-final appearance at the U.S. Amateur Championship. As a junior at Kent State University, he also notched a slew of top-10 finishes in NCAA action. In addition, the Listowel, Ont., native made an appearance at the PGA TOUR’s RBC Canadian Open and posted a third place finish at the prestigious Monroe Invitational.

Rounding out the next three spots on the Men’s Order of Merit were Team Canada National Squad member’s Taylor Pendrith of Richmond Hill, Ont., Garrett Rank of Elmira, Ont., Adam Svensson of Surrey, B.C., while Charlie Hughes of Langley, B.C., finished the 2013 season in fifth place.

On the women’s side, Henderson, 16, sits as the No. 9 ranked female amateur in the world. In 2013, the Team Canada member captured three titles, including the Canadian Women’s Amateur Championship, the South American Amateur Championship and the CN Future Links Pacific Championship. On the professional stage, the Smiths Falls, Ont., native recorded two top-3 finishes on the CN Canadian Women’s Tour, a T35 finish at the LPGA’s Manulife Financial Classic and made an appearance at the CN Canadian Women’s Open. In addition, at only 15 years of age, Henderson finished T59 at the 2013 U.S. Women’s Open – an LPGA major and premier world event.

Rounding out the top-five in the women’s national rankings were the city of Québec’s Anne-Catherine Tanguay, Soobin Kim of Coquitlam, B.C., and Team Canada’s Augusta James of Bath, Ont., alongside her teammate Brittany Marchand of Orangeville, Ont.

In the junior divisions, Kevin Kwon, 18, of Maple Ridge, B.C., and Henderson finished atop the CN Future Links Junior Boys and Junior Girls National Order of Merit respectively, to earn the distinction as Canada’s top junior golfers in 2013.

Hugo Bernard of Mont-St-Hilaire, Qué., finished in second on the CN Future Links Order of Merit, while Étienne Papineau of St-Jean-sur-Richelieu, Que., finished in third. Ontario native’s Joseph Kremer of Toronto and Tony Gil of Vaughan, Ont., rounded out the top-5.

The following are the Top 10 on the Men’s and Women’s 2013 National Orders of Merit presented by Under Armour:

The National Men’s and Women’s Order of Merit presented by Under Armour recognize season-long achievements and were established to identify Canada’s top amateur golfers.

The following are the Top-10 on the CN Future Links Junior Boys and Junior Girls 2013 National Orders of Merit: