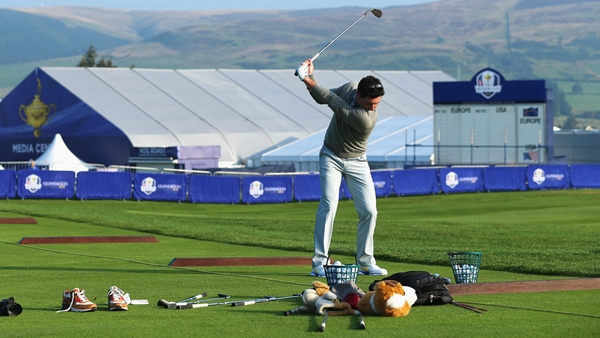 GLENEAGLES, Scotland – European captain Paul McGinley is having second thoughts about a Rory McIlroy-Graeme McDowell partnership in the Ryder Cup.

Attribute that to an ordinary record, not an acrimonious lawsuit.

The Northern Irish duo has made it clear in recent weeks that McIlroy’s lawsuit against Dublin-based Horizon Sports Management – which involves allegations against McDowell – has not affected their friendship and would not be a problem at Gleneagles this week.

“Both of them have assured me all along that there’s no issue, and that’s the way I’ve always seen it,” McGinley said Monday in the opening news conference of Ryder Cup week. “Whether they come together or not is another story.”

McDowell and McIlroy are longtime friends and major champions. They have been Ryder Cup partners for all but one session dating to 2010 at Wales, though their record is hardly impressive. They have won only two of those matches and halved another.

“Three or four months ago, I had a very strong view that they would have been (partners),” McGinley said. “But the more I look at their statistics, and the more I look at the different value I have with them, I’m thinking there may be a value in not doing it. But if I don’t do it, it certainly won’t be because of any issues.

“As both of them have said, there are no issues between them and both will be happy to play together,” he said. “But it will be my decision ultimately.”

Both teams arrived at Gleneagles on a relatively quiet day in which a haircut attracted most of the attention.

Rickie Fowler, a teen idol in golf circles, stepped off the U.S. charter at Edinburgh with “USA” cut into the side of his hair. Even old-school Tom Watson, the 65-year-old American captain, liked it.

“I thought it was terrific,” Watson said. “It brings a light spirit to the team.”

The Americans flew overnight as a team, and planned little more than chipping and putting Monday before getting started on their practice rounds. Watson has reminded them from his vast experience – only three American players were even born when Watson played his first Ryder Cup in 1977 – not to worry if it takes a few days for their golf games to come around.

Half of the European team lives in Florida and players began arriving in the U.K. over the last week.

McIlroy left Horizon more than a year ago and their lawsuit is scheduled to go to trial as early as January. An Irish judge has recommended that both sides go through mediation because of sensitive material that would be public. Among other things, McIlroy has alleged that McDowell received more favorable contract terms from Horizon, and McIlroy’s lawyers have requested confidential documents.

McDowell announced last week that he also was leaving Horizon, under amicable terms, to put his own team around him.

They said they remain close and even had dinner together in Denver earlier this month.

McIlroy has had only one other partner in his two Ryder Cups. He was with Ian Poulter in fourballs in the final session at Medinah two years ago, and it was memorable. Poulter birdied his last five holes to give Europe an improbable point, and plenty of momentum that carried the side to a stunning comeback to retain the cup.

That has become a focal point for the American side.

“I made it very clear to them that this trip is a redemption trip,” Watson said. “Those players that played on that team, it’s time to make amends and try to redeem yourselves from what happened in 2012. I think it’s a motivation rather than a negative.”

Europe is considered a favorite, and McGinley believes that to be a badge of honor instead of a burden.

“We have been favorites before,” said McGinley, who has never been part of a losing Ryder Cup team as a player or vice captain. “And I think our players deserved it. The guys have worked very hard to be in the position they are.”

Even so, he has implored his team not to read too much into it. Europe has won only three of the last 13 sessions dating to 2008, and just two sessions in the last two Ryder Cups they won. The matches have been close, and the rosters of both teams indicated Gleneagles could be another replay of that.

“This is not a weak American team,” McGinley said. “We might be slight favorites with the bookies, but the two teams are very well balanced and very close together. We know it’s going to be a very tough contest ahead of us.”