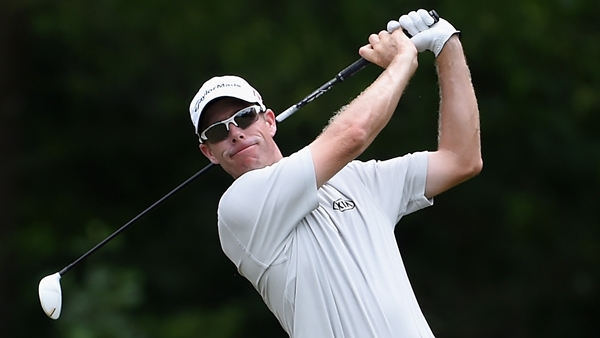 AVONDALE, La. – Erik Compton birdied three of five holes after a nearly six-hour rain delay Saturday, giving the two-time heart transplant recipient a share of the lead with Jason Day early in the third round of the rain-plagued Zurich Classic.

Compton and Day were at 13 under, a shot ahead of Justin Rose, Blayne Barber, Jerry Kelly and Canada’s David Hearn at TPC Louisiana when play was suspended because of darkness.

Compton finished six holes, and Day played three. Before rain halted play at 12:14 p.m., Day finished off a 7-under 65 to take the second-round lead.

Winless on the PGA Tour, Compton also completed a 65 in the second round.

“It was nice to come out this morning and finish the round,” Compton said. “And then, I basically just did what everybody else did, just saddled up and waited.”

“It’s going to be a low scoring tournament so fortunate to get off to a decent start, a good start,” Compton said. “It’s a lot of golf, so you know you have to reach a number.”

The strong storm downed at least one tree and toppled tables. Play resumed at 5:57 p.m. and was suspended for the day at 7:32 p.m.

Play was scheduled to resume at 7:30 a.m. Sunday, and sun and a high around 90 were forecast. The players will not be repaired for the final round.

It took Day 13 hours to get in seven holes Saturday.

“It’s just a lot of patience you had to have today,” Day said. “I know that it’s very easy to get frustrated and start getting angry at the things that have gone on, especially with the weather. But with everyone that’s getting frustrated I know I can’t. Just got to stay centered and keep pushing.”

The Australian, the highest-ranked player in the field at No. 6, will open his title defense in the World Golf Championships-Cadillac Match Play next week in San Francisco

Dustin Johnson, ranked No. 7 in the world, was 7 under. Boo Weekley, the first-round leader after a 64, was 9 under – 1 over through five holes in the third round.