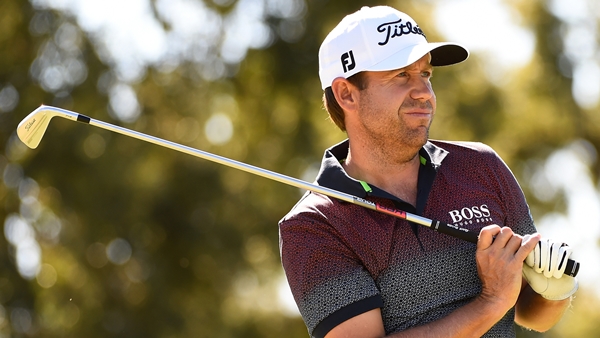 ST. SIMONS ISLAND, Ga. – Erik Compton is happy with where he is in golf, and he’s not referring to his 5-under 65 on Thursday for a share of the lead in the McGladrey Classic.

A return to Sea Island provides an occasion to take stock of how far he has come in the last 13 years, and what Compton refers to as the “hurdles” he didn’t anticipate.

There’s a medical term for these hurdles. It’s called a second heart transplant.

“I’m almost 35 years old. I’ve had a good career in golf, really,” he said. “Even though I’ve had some time off, I’ve been able to support myself and have a good life.”

Compton remarkably earned a PGA Tour card just four years after he drove himself to the hospital while suffering a heart attack, dodging death until he received a second transplant. He now is in his fourth straight season on golf’s toughest circuit, and he has shown steady improvement.

The next step is to win, and Compton has been around long enough not to get overly excited about a good start.

He opened with a pair of birdies in the morning chill on the Seaside Course at Sea Island, dropped only one shot and joined Sea Island resident Brian Harman, Michael Thompson and Will MacKenzie in the lead.

Chesson Hadley was among six players one shot behind. More than half of the field was at par or better on a gentle day for scoring.

“I expect I should win this year. That’s a goal of mine,” Compton said. “It’s always been a goal, but I think every time I get on the course it becomes more of a realistic expectation.”

Compton first played Sea Island when he competed in the SEC Championship while at Georgia in 2001. A few months later, Compton played in the Walker Cup at nearby Ocean Forest.

Compton had his first transplant when he 12 because of cardiomyopathy, an enlarging of the heart that hinders its ability to pump blood. He had his second in 2008 and ended that year by making the cut in the final PGA Tour event.

His story never gets old, and Compton is happy to tell it, especially if that means bringing attention to the “Donate Life America” campaign. He prefers to look ahead, at the next shot, the next tournament, trying to get the most he can out of his game, just like the guys he is trying to beat.

Compton has reached the FedEx Cup playoff the last two seasons and advanced to the third round at the BMW Championship last month. In the short offseason, he spent more time in the gym trying to get stronger at the recommendation of former Miami Heat guard Ray Allen.

“I went to the gym with him a couple of times and played him for some money games in Miami,” Compton said. “He was just trying to motivate me to get in better shape. So I worked out a little bit. And then just played five or six rounds with him before I went back on the road.”

“I got him five ways one day,” he said without mentioning a dollar amount.

Compton played on that Walker Cup team with 2009 U.S. Open champion Lucas Glover along with Bryce Molder and D.J. Trahan, who both went on to win on the PGA Tour. The Britain & Ireland team featured former world No. 1 Luke Donald and Graeme McDowell, the U.S. Open champion at Pebble Beach.

Compton’s hopes were not much different from theirs – turn pro, win tournaments.

“I think when I was younger, I had some unrealistic expectations,” he said. “I knew I was a good player. I obviously had some hurdles that I had to deal with in front of me, which I didn’t see coming. I didn’t know I was going to have to deal with that.”

What’s real to him now is being a PGA Tour regular. He’s going to the Masters next year for the first time, courtesy of his runner-up finish in the U.S. Open. That remains his biggest highlight in golf.

What’s next? He’s curious to find out. Compton is learning not to swing so hard to take advantage of his putting stroke.

“I just want to get the ball in play and hit on the green and see where I can go,” he said. “And that’s difficult to do in four days, and it’s proven difficult for a lot of guys who have never won on tour who have great careers. I happen to be one of those guys right now, and I feel like if I can do the things like I did today and get out of my own way, there’s no reason I shouldn’t continue to progress in this game.”

Canadians Adam Hadwin and Roger Sloan opened with even-par 70s and are tied for 59th after the opening round. The other Canadian in the field is Nick Taylor. He carded a 3-over 73 Thursday and is tied for 112th.