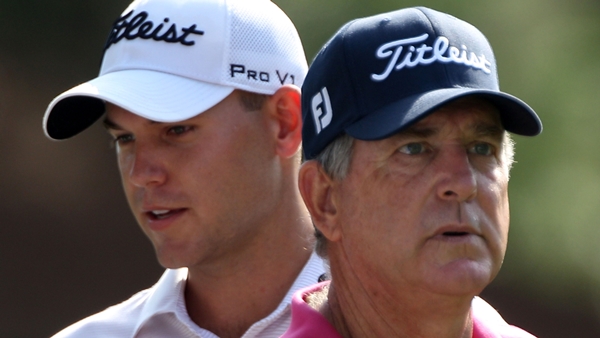 AUGUSTA, Ga. – If connections were all it took to make a splash at the Masters, Bill Haas would have contended long before now.

“We’ve had a bunch of family play here,” said Haas, whose opening-round 68 catapulted him into the lead.

“A bunch,” as it turns out, is hardly an exaggeration. Bill’s father, Jay, played the tournament 22 times from 1976 to 2005. His uncles, Jerry Haas and Dillard Pruitt, made the field once and twice, respectively. His great uncle Bob Goalby won in 1968.

But golf is not one of those enterprises where a dad simply hands over the keys with a pat on the back, says “good luck,” and the business runs exactly the way it did before.

It’s easier to inherit size, strength and speed, apparently, than touch. Even casual fans can come up with the great father-son pairings in most other pro sports: Bobby and Barry Bonds (baseball); Archie and Peyton and Eli Manning (football); Rick and Scooter, Jon, Drew and Brent Barry (basketball); Bobby and Brett Hull (hockey); Dale Earnhardt Sr. and Junior (NASCAR).

To find golf’s best father-son tandem, you have to turn back almost 150 years. That would be Tom Morris Sr. and Tom Morris Jr., who were known as “Old Tom” and “Young Tom” to avoid any confusion, since they each won four of the first dozen British Opens.

At least nine father-son tandems have won golf tournaments since, and a dozen have played in the Masters – but never in the same tournament together until Craig and Kevin Stadler did it Thursday.

Asked why golf didn’t seem quite as family-friendly as the other sports – at least in terms of success – Haas was ready with an answer.

“I’ve been asked that before, and I think (it’s) purely numbers. The odds of getting out on tour are small. And then you take it down to how many tour players have sons, and then how many have sons that even like golf.

“And then if you like golf,” he said finally, “the best part about this game is that you have to earn it.”

Haas, from Greenville, S.C., did just that on his sixth go-round at Augusta National with his own scorecard in his pocket. He got off to a shaky start with a bogey at No. 1, then found another gear and tore off six birdies. His second hiccup came at 17, when his iron shot landed just past the flag yet somehow slid all the way off the right side of the green.

Bill was along for plenty of Jay’s rounds and even toted the bag on one occasion. He had no trouble recalling his previously most memorable trip. That was 1995, when Jay was leading by two strokes midway through the tournament. Oddly enough, the wind figured into that one, too.

As Jay stood over a short putt, a gust moved the ball, costing him one stroke. He dropped another when his shot into 15 slid off the green and into the pond.

Jay, who is 60 and a force on the Champions Tour, won nine times on the PGA Tour. But his dream of getting the locker next to Goalby’s in Augusta National’s champions room never got closer than that third-place finish.

“That can’t happen,” Jay told The State newspaper of Columbia, S.C., last week, “but I hope Bill can.”

Bill has been aiming at that goal since high school. A friend took Jay and his sons to Augusta back then and they squeezed in 27 holes, in addition to playing in the pre-tournament Par 3 contest.

“Did you beat him?” a reporter asked Bill, referring to Jay.

“I don’t think so. I don’t beat him much, honestly,” Bill replied.

“Even now?” came the follow-up.