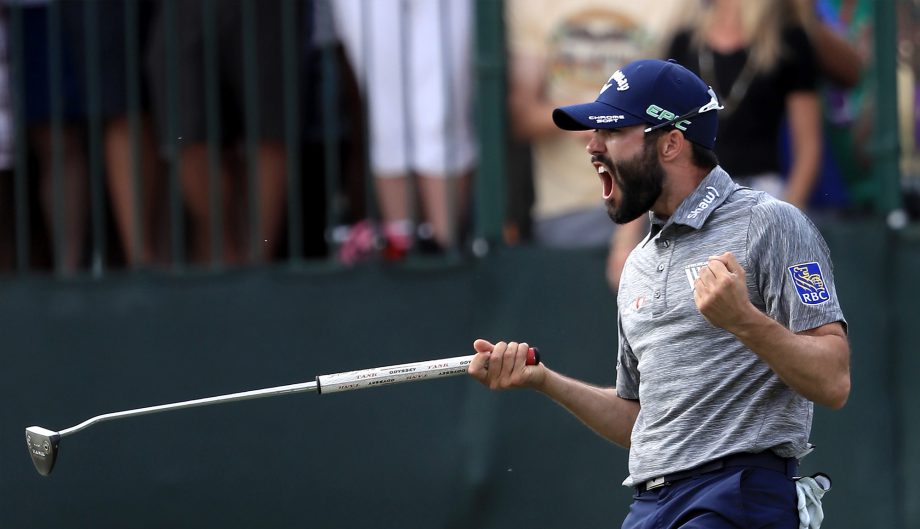 Adam Hadwin’s breakout season comes as no surprise to those who have followed the Canadian’s journey from golf obscurity to PGA Tour tournament champion. He had the talent, he just needed the momentum.

Hadwin continued his remarkable season Sunday, capturing his first Tour title at the Valspar Championship in Palm Harbor, Fla. That followed a runner-up finish at the CareerBuilder Challenge in January, where he became the eighth player in Tour history to shoot a round of 59.

Hadwin has moved up to fourth in the FedEx Cup rankings and 51st in the world rankings, a rapid turnaround for a golfer who missed 12 cuts in his first PGA season. But ever since 2009, when he was making his pro start on the developmental Vancouver Golf Tour, Hadwin has been serving notice that he had the talent to make it on golf’s biggest stage.

“I learned pretty quickly he was a pretty confident guy. There was an air about him. I played with him in his second event, and he just whooped my (butt),” said Fraser Mulholland, who runs the Vancouver Golf Tour. “I hadn’t played with a guy who had hit it that far and that solid. I got off the course and said, ‘Wow, that looked different. That looked easy.’

“He was showing me then what a PGA Tour-calibre player was all about.”

Hadwin won four times on the VGT before moving on to the Canadian Tour (now called the Mackenzie Tour-PGA Tour Canada) and Web.com Tour, where he was the overall money winner in 2014 with US$529,792 in earnings. He’s currently in his third season on the PGA Tour.

Nick Taylor, a PGA Tour tournament winner in 2014 who grew up playing junior golf with Hadwin in Abbotsford, B.C., said he knew success was going to happen for Hadwin once he got comfortable with his game.

“If you talk to anybody, anyone who has caddied for him or coached him, he’s got all the talent in the world, and then he was just able to piece it all together,” said Taylor, who was there to greet his friend after the 72nd hole on Sunday.

“Everyone has their comfort zone and this year it looks like he’s dialed it in. Once he got dialed in, and once he got out of his own way, he was going to succeed, there was no doubting that.”

Brad Fritsch, a PGA Tour regular from Ottawa, spent a lot of time with Hadwin on the Web.com Tour as they tried to get to the next level.

“I didn’t know anything about him, but he played on the Canadian Tour and started playing very well. That’s when I kind of figured he was pretty legit,” Fritsch said. “He’s very sure of his ability.

“He feeds a lot on momentum, and when his ‘good’ gets going, it gets really silly how good he can be.”

Hadwin, who was born in Moose Jaw, Sas., is the second Canadian to win on the PGA Tour this season after Hamilton’s Mackenzie Hughes captured the RSM Classic in November. The two will join former champion Mike Weir at the Masters this year, and it will be the first time three Canadians are in the field at the storied major tournament.

Jeff Monday, president of PGA Tour Canada where Hadwin played from 2010-11 and won two tournaments, thought Sunday’s win was a step the 29-year-old was going to take in his career eventually.

“The way he’s handled himself at each level is very impressive,” Monday said. “To be able to overcome some disappointments and keep working, keep going through the process, is impressive. For some people it happens quick, and for some people, they just keep building on their momentum.

“It’s tremendous to see. It’s incredible to me because the level of talent coming out of Canada is only going to be getting stronger.”

Back where it all began in British Columbia, Mulholland thinks more wins are in store for Hadwin.

“He’s got a very promising career ahead of him,” he said. “His golf swing is beautiful, and most importantly he knows how to putt. Now that he’s got his first win, I’m not going to say he’s going to win five times this year, but he could win five or 10 times in his career. Maybe more.”