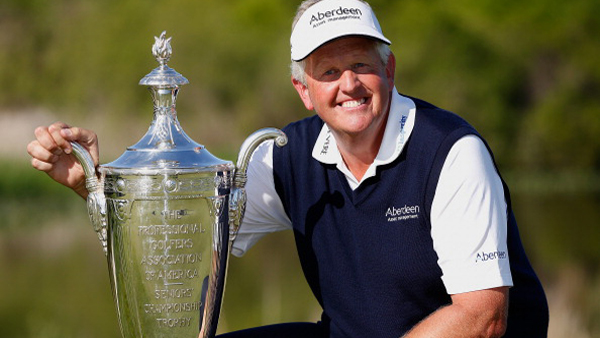 BENTON HARBOR, Mich. – Colin Montgomerie won the Senior PGA Championship on Sunday, finishing with a 6-under 65 for a four-stroke victory over 64-year-old Tom Watson.

It marked Montgomerie’s first victory as senior, his first win in seven years and his first in an official event in the United States. He also claimed a senior major in his fifth attempt, something he didn’t accomplish in 71 majors in his regular tour days.

The 51-year-old Scot finished at 13-under 261 at Harbor Shores. The victory was his first since he took the 2007 European Open for his 31st European Tour title.

Watson also closed with a 65.

Jay Haas and Bernhard Langer tied for third at 7 under. Haas had a 67, and Langer shot 70.

Montgomerie offered some comic relief on the final hole when he pulled his final approach some 20 yards only to get a bounce off the grandstand. The ball rolled to the middle of the green to set up a tap-in par.

Watson put a charge in the tournament when he made birdies on the second and fifth holes and started the back nine with consecutive birdies to pull within one shot of the lead. He missed a 4-foot birdie putt at the short par-5 15th hole that would have put him within one shot again.

He will head home to Scotland for a few weeks with a first-place check of $378,000 and his name will go on the Alfred S. Bourne Trophy. The win also netted him a lifetime exemption to the Senior PGA Championship, and 2014 exemptions for the PGA Championship, Senior British Open and U.S. Senior Open.

Watson, who made a bid to be the oldest player to win a senior event of any kind, had five consecutive pars to end his round while missing several birdie chances.