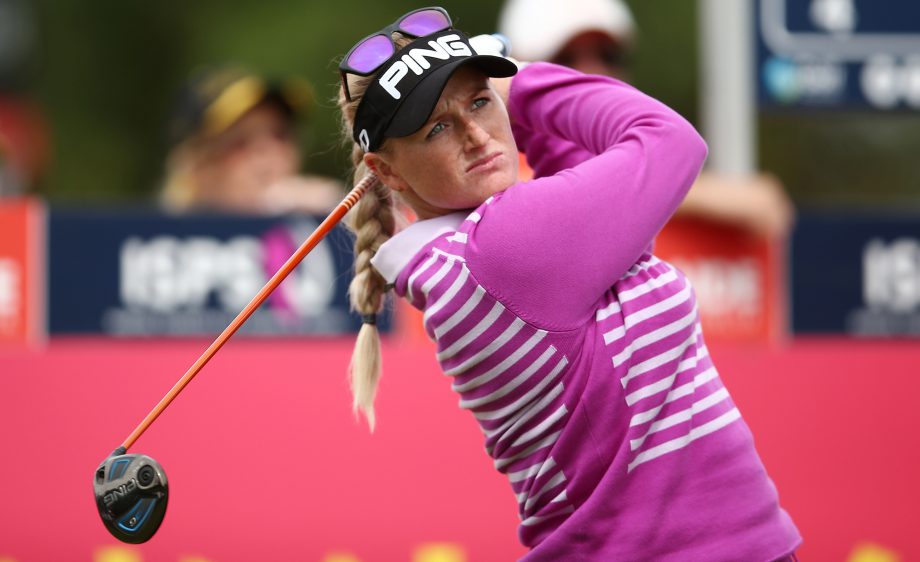 ADELAIDE, Australia – England’s Holly Clyburn shot a 7-under 65 Friday to take a share of the second-round lead with 46-year-old Scottish golfer Catriona Matthew at the Women’s Australian Open.

“I think that’s the beauty of golf, you know you can play, it doesn’t matter what your age is really as long as you can still hit the golf ball and get it in the hole,” Matthew said. “Age isn’t a barrier.”

Jack Nicklaus, who won his sixth Masters title at Augusta in 1986 at the age of 46 – the last of his record 18 majors – agreed. He took the time to send a tweet to Matthew following her round Friday.

“Hang in there and don’t give up, finish strong! Everyone wrote me off at 46!” Nicklaus said on Twitter.

Two strokes behind the leaders and in seventh place after a 71 was five-time champion Karrie Webb. She had a 67 Thursday.

“It was a bit scratchier today. I wasn’t as sharp with my iron play,” Webb said. “I still hit 14 greens but didn’t have a lot of decent looks at birdies. I just really hung in there.”

Canadian-based South Korean SooBin Kim, the first-round leader who shot a course-record 63 on Thursday, bogeyed five of her final seven holes Friday for a 77 and fell to 4-under, tied in a group four behind the leaders.

Top-ranked and defending champion Lydia Ko, who won last week’s New Zealand Women’s Open, had a second consecutive 70 and was also at 4-under.

“I feel like I’m in a good position. I reckon I could have cut a few more shots down but at the same time I think could have gone higher, so it all balances out,” Ko said. “But being a couple or a few shots behind isn’t a bad position.”

Canadian Brooke Henderson shot 71 Friday and was at 3-under, five strokes behind. There were 20 golfers within four shots of the lead.

Cheyenne Woods had a 78 and was at 4-over and missed the cut, as did former champion Laura Davies after a 76 to finish at 10-under.

Clyburn, winner of last year’s New South Wales Open, began her round with an eagle and three birdies in her first five holes.

“I was loving it, really,” Clyburn said. “I have been waiting for this round for a long time.”

In October 2014, Clyburn was well-placed in the second stage of LPGA qualifying but was disqualified when her playing partner failed to sign her scorecard.

“Probably what happened 14, 15 months ago was for the best, I don’t know,” Clyburn said. It’s her second start on the LPGA Tour.

Matthew won the Australian Open 20 years ago at Yarra Yarra in Melbourne and, among other wins, added two majors – the Women’s British Open title in 2009 and the LPGA Championship in 2013.

With her husband, Graeme on the bag – he’s been her caddie for 16 years – the Scottish player has hit 16 greens in each of her first two rounds, including a 67 Thursday in tougher afternoon conditions.

“It’s tricky if you start missing the greens out here, it’s not easy up and down,” Matthew said.

The tournament is also sanctioned by the Australian Women’s and Ladies European tours.

Alena Sharp of Hamilont, Ont., sits tied for 66th following a round of 75.