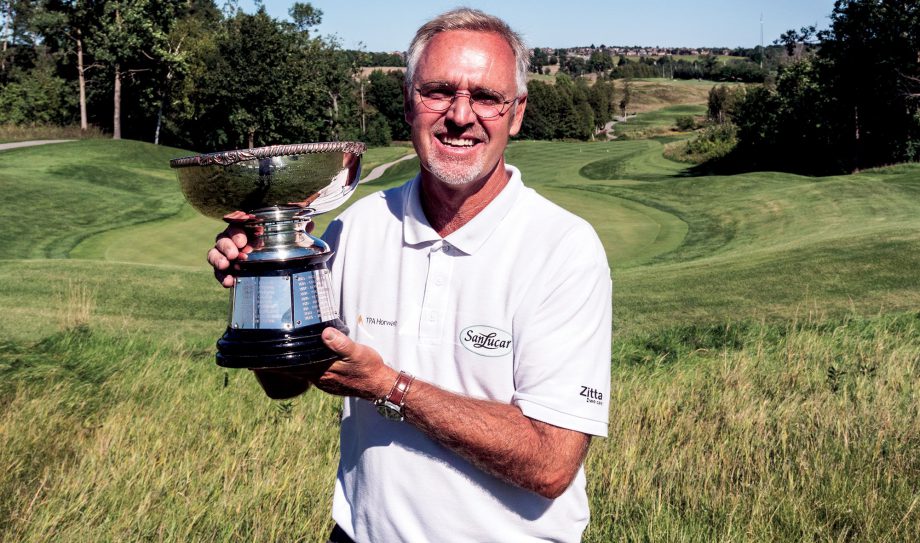 THORTON, Ont. – Entering the final round of the Mr. Lube PGA Seniors’ Championship of Canada, Claude Grenier held a four-shot lead, but by mid-afternoon Friday, his lead had all but evaporated.

Grenier started his final round at Tangle Creek Golf and Country Club in Thorton, Ont., double-bogey, bogey. By the time he reached the 12th tee, he was 5-over for the day and had fallen out of first-place.

“I wouldn’t say I was really nervous early on, but I was definitely feeling something,” Grenier said. “I was 5-over-par after 11 holes and I could see all these guys all of sudden be back in the tournament, I knew I had to do something.”

That something came promptly at the 12th hole.

“Holing out from the fairway on No. 12 definitely saved my bacon out there today and changed the way my round was going.”

“I look at the names on this trophy and it’s just amazing,” Grenier said. “I never would have ever thought I’d have my name on the same trophy as the great Moe Norman.”

Originally from Sherbrooke, Que., Grenier now lives in Europe and is a member of the PGA of Austria. The 56-year-old said it was a pleasure catching up with many of his old friends this week at Tangle Creek.

“There were guys here who I played junior golf with and now I see them with grey hair – it’s actually very funny,” said Grenier. “But yes, it’s also very nice to see all the old gang again.”