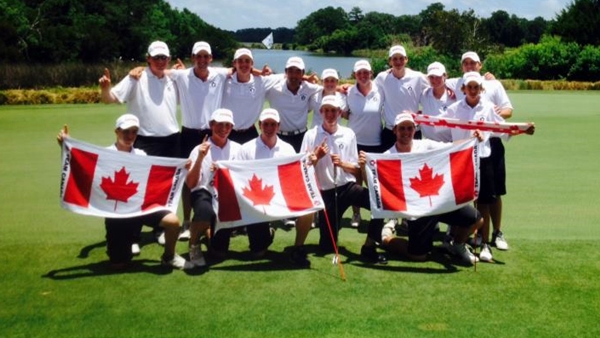 “I think we definitely had team spirit,” said CJGA Team Captain, Mitchell McPhail. “Last year we struggled as a team to bond. This year we were more of a team, which brought us better chemistry together in our matches. That was a huge key to our victory today.”

After holding a 10-4 lead in team matches through two days of competition, the final day came down to one-on-one singles competition. Team USA battled back winning 3 of the first four matches, but after a solid first two days, the Canadian squad only needed 4.5 points, in which they would slowly secure.

Andrew Russ (Oakville, Ont.) secured the 14th point of the tournament winning 3 & 2 against C.J Hughes (Indiana, Pennsylvania) in the 12th match. With Russ’ points secured, and John Burghardt (Oakville, Ont.) on the fairway of 18 with a 1 up lead, Team Canada had guaranteed themselves a victory reaching the 14.5 points needed to win the cup.

“This is hands down the best display of golf and competition I’ve ever seen,” said CJGA Team Canada non-playing Captain Stephen Nixon. “Team USA came back strong today and deserve a lot of credit. It means so much to be apart of the team that finally brought the cup home. In a sport that is supposed to be all about the individual, these kids were unbelievable in the way that they came together as a team so quick.”