Ciganda fires 66 to grab share of lead at HSBC Champions 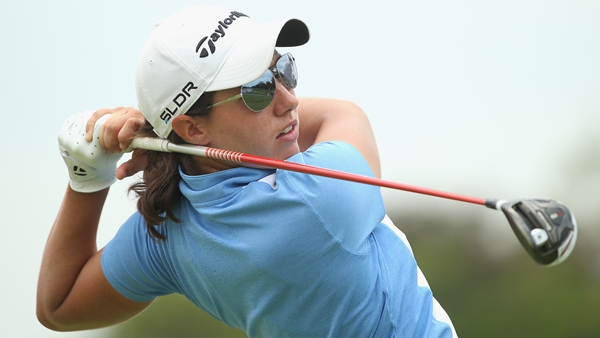 SINGAPORE – Carlota Ciganda shot a 6-under 66 on Friday to move into a tie for the lead with Inbee Park after the second round of the HSBC Women’s Champions.

Ciganda offset a pair of bogeys with eight birdies at Sentosa Golf Club to finish even with Park (69) at 9-under 135.

Azahara Munoz was in sole possession of third place, two strokes back, after a 67 that featured six birdies against a lone bogey.

Ciganda, who is bidding for her first LPGA victory, got off to a shaky start with a bogey on the par-4 first hole. But she quickly recovered with two straight birdies on Nos. 2 and 3 that set her on the way to the day’s lowest score.

Top-ranked Lydia Ko birdied three of the last four holes en route to a 70 that put the 17-year-old in a tie for fourth with Stacy Lewis, Jenny Shin and Karrie Webb at 6-under.

Defending champion Paula Creamer was tied for 36th after a 71. Michelle Wie fired a 70 that included three bogeys, three birdies and an eagle and is tied for 23rd with money rankings leader Amy Yang.

Overnight co-leader Yani Tseng struggled with her game and finished with a 75 for a share of 17th place.