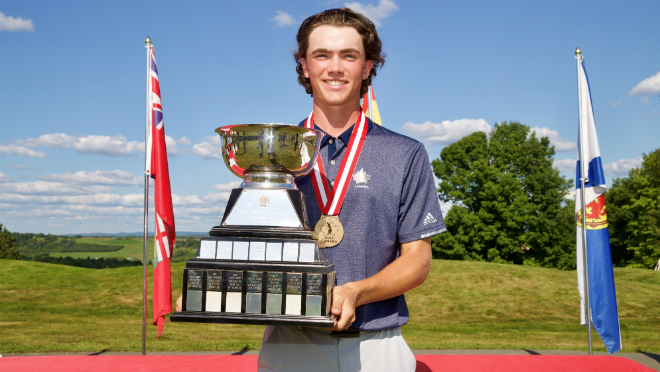 Vandette carded a final round of 1-under-par 71 to finish the championship at 14 under, winning by a single stroke over Brady McKinlay of Lacombe, Alta. The 18-year-old tied the lowest round ever at the Canadian Junior Boys Championship when he shot 62 in the opening round. Although the field closed the gap as the week wore on, the Team Canada National Junior Squad member emerged victorious.

“It was a long week, especially after such a good first round,” said Vandette. “I ran out of gas a bit at the end, but managed to get it done. I’m really excited and proud of myself for holding on to the lead there.”

Vandette birdied the par-5 18th to clinch the championship. His second shot from the fairway landed within 15 feet of the pin, where Vandette then two-putted to secure the title.

“You can’t see the green at all [from the fairway], so I was just aiming at someone in the crowd there,” added Vandette. “I let it drift toward the left part of the green. I overdrew it a bit, but it held on and stayed on the fringe.”

Vandette briefly trailed McKinlay on the back nine, but retook the lead with a birdie on the par-4 16th hole. McKinlay bogeyed the hole, giving Vandette a one-stroke lead he would not relinquish.

“I wasn’t putting well all day – I actually three-putted No. 15,” said Vandette. “On No. 16, I managed to hit it close enough to not have to worry about my putt. I wasn’t focusing on what Brady was doing, but he just ended up with a bad break.”

With the victory, Vandette becomes the first back-to-back champion since Mitch Sutton won in 2008 and 2009.

As the 2019 Canadian Junior Boys individual champion, Vandette earns an exemption into the 2020 Canadian Men’s Amateur Championship, held at The Glencoe Golf & Country Club in Calgary from August 3-6, 2020.

Despite trailing by ten shots after the first round, McKinlay made a charge in the final round by carding a 4-under-par 68. The 18-year-old shot even-par in the opening round, but rebounded with rounds of 70 and 65 in rounds two and three to finish runner-up.

“I was a little bit disappointed with the first two days,” said McKinlay. “The last two days were picture-perfect almost, I just needed a couple of more shots. To keep going lower and lower up until the last day and then to do 4 under today was really good.”

The second-place finish caps a series of strong performances for McKinlay, who finished tied for second at the Future Links, driven by Acura Western Championship, third at the Alberta Junior Championship and made the cut at the Canadian Men’s Amateur Championship.

Carter Graf of Sylvan Lake, Alta., finished third at 11 under by posting a final round of 2 under 70.

The 16-and-under Juvenile division was decided in a playoff. Both Tommy McKenzie (Calgary) and Luke DelGobbo (Fonthill, Ont.) finished 72 holes at 8 under. DelGobbo, 16, won the title with a par on the second playoff hole.