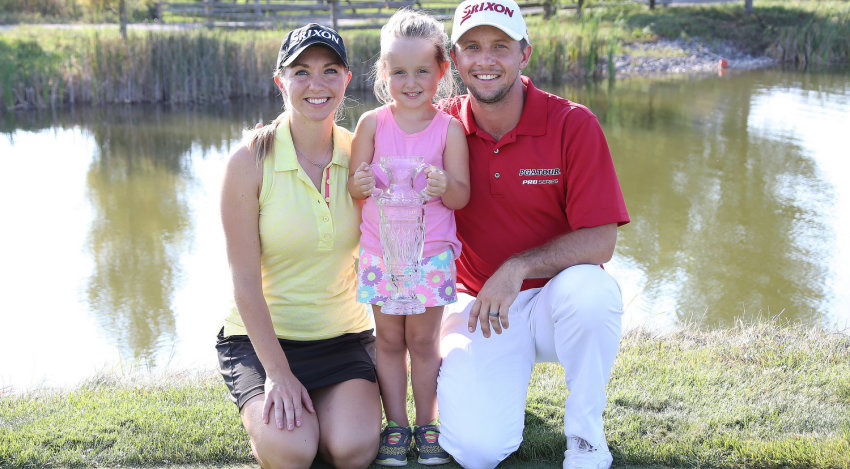 The 28-year old reached 25-under for the tournament with his second straight round of 64 to win by four over England’s David Skinns. Ross moves to eighth on the Mackenzie Tour Order of Merit with two events to go in the season.

“It’s an amazing feeling. I’ve been waiting a long time to win on a big tour like the Mackenzie Tour, and to be a winner on it right now is surreal,” said Ross, a graduate of Eastern Michigan University.

Ross began the week 61st on the money list and trailed no. 60, the cutoff to get into the season-ending Freedom 55 Financial Championship and retain exempt status on Tour for next year, by $1. With that goal accomplished, his focus turns to the season’s remaining two events and the opportunity to earn status on the Web.com Tour next season.

“I have two more big weeks to go, and to be inside the top five is obviously your big goal. To go from 61st just to get into the season-ending event, honestly, I really think I set a mark, and maybe I can carry it over,” said Ross.

The win represents a family celebration for Ross, who had wife Stephanie caddying for him all week and counted his mother Janet and 4-year old daughter Sam among his biggest fans all week.

“Any win is special, but to have your family out there, it’s a really, really amazing feeling. The third round was big for me. To look over every time you make a putt and have your little girl give you a thumbs-up, it’s just something that’s bigger than golf. Make it or miss it, I’m still the same guy. That was a surreal feeling,” said Ross.

Ross’ father Stephen, a member of the Canadian Golf Hall of Fame and former Golf Canada Executive Director, recently underwent bypass surgery and was unable to attend, but was following closely online according to Chris.

“It means a lot. He’s the one that brought me to play golf,” said an emotional Ross after the win.

Ross began the day one shot off the 54-hole lead held by David Skinns and Chase Marinell, but quickly took control of the tournament with a 4-under 32 on the front nine, then birdies at the 10th and 11th holes to take the lead by two. While his pursers were unable to mount a charge, Ross blew open the tournament with birdies on 14 and 16 to build a five-shot lead.

“Definitely I could feel it. I saw the leaderboard on number six, and it was jam-packed. I just said ‘here we go, we just gotta go do our thing.’ To separate myself after 11 was huge,” said Ross.

A two-putt par at the last was all that remained, and when the final putt dropped, Ross was swarmed and embraced by family and friends as the celebration began.

Skinns notched career-best finish with his solo second effort, while Spaun and Pan sharing third place made waves on the race for The Five and status on the Web.com Tour next season. Spaun extended his lead with $88,534 in earnings, a new PGA TOUR-era record, while Pan vaulted into third place with $49,806.

SPAUN BOOSTS LEAD IN THE FIVE

With a T3 finish, J.J. Spaun extended his lead atop the Order of Merit on Sunday. Below are The Five through The Wildfire Invitational presented by PC Financial (bold denotes Canadian):