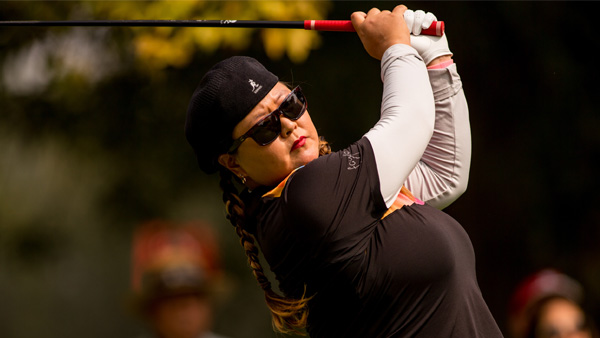 MEXICO CITY — Christina Kim shot a 3-under 69 on Friday to maintain a one-stroke lead in the Lorena Ochoa Invitational.

Kim birdied the par-3 16th to take the outright lead and parred the final two holes at tree-lined Club de Golf Mexico. She had a 10-under 134 total.

“I love Mexico,” Kim said. “Everything about it – the culture, the food. It’s amazing.”

The 30-year-old American birdied three of the first four holes, dropped strokes on Nos. 7 and 9, and rebounded with a short birdie putt on the par-3 13th.

“It was getting a little sketchy in the middle of the round,” Kim said. “I just kind of hung through it and just tried to enjoy myself and, again, tried to see if I could be the best Lorena that I could be. Overall, it was a good day. It was just very stressful.”

Paula Creamer was second after a 65, the best round of the day.

“It was good to see some nice results with my irons,” Creamer said.

Creamer birdied seven of the first 14 holes. She won the HSBC Women’s Champions in Singapore in March for her 10th tour title, holing a 75-foot eagle putt on the second hole of a playoff with Azahara Munoz.

“I switched to left hand low and I switched my whole putter at Evian and that’s been probably the greatest thing that I’ve done,” Creamer said. “I just have a lot of confidence. My routine and what I do when I’m over the ball is the same every time. It’s more about speed instead of thinking about my stroke.”

Munoz, Suzann Pettersen, Lydia Ko and Pornanong Phatlum were tied for third at 7 under. Pettersen shot 66, Phatlum 68, Ko 69, and Munoz 71.

Michelle Wie had a 69 to reach 2 under. She won the 2009 event at Guadalajara Country Club for her first LPGA Tour victory.

Lexi Thompson, the winner last year at Guadalajara, also was 2 under after a 72.

Second-ranked Stacy Lewis followed her opening 76 with a 70 to reach 2 under. She was tied for 27th in the 36-player field.