The ‘choose your own adventure’ of golf courses 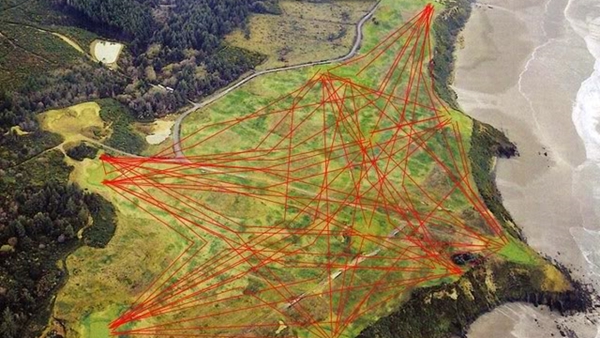 Tom Doak is likely most familiar to Canadians for the integral role he played in the reconstruction of St. Georges Golf Club in 2014.

Recognized as one of the preeminent golf course architects in the world, the Pete Dye disciple has designed some of the world’s most famous golf courses including Ballyneal in Colorado and Pacific Dunes in Oregon.

Recently, however, it was one of Doak’s lesser-known tracks which has made headlines in the golfing world.

Featured in a golf.com article was the Bally Bandon Sheep Ranch, an unconventional and minimalist course that, to this day, remains a secret to many of the game’s biggest fanatics.

Just north of the Bandon Dunes Resort, overhanging the Pacific coastline, the track has undergone various aesthetic modifications since its design in 2002, but remains true to the character and vision that Doak and co-founders Mike Keiser and Phil Friedmann has initially intended.

“A simple idea, with complicated results, that had to be executed simply,” said Doak, describing the Sheep Ranch’s construction to golf.com in a recent interview. “It reshaped my idea of what was possible in golf course design.”

The course can be aptly described as a hybrid between a gigantic, all-encompassing practice facility and a leisurely round of golf that emphasizes choosing one’s own adventure.

Dubbed by those who have played it as golf’s “Area 51”, the design consists of 13 greens — labeled A through M — that are scattered across the property.

(The Sheep Ranch’s “J” green, tucked away on a cliff-side peninsula)

There is no clear instruction of the proper order to tackle the course, other than a haphazard array of arrows on the Sheep Ranch’s scorecard.

“The suggested routing is something I argued strongly against,” said Doak in the above mentioned interview. “We only wanted to give people a ‘mileage chart’ from every green to every other green, and turn them loose, with possibly a few suggestions as to what were the better holes.”

(Most of the track overlooks the Pacific coast)

Pacing issues do not exist at the Sheep Ranch because patrons always have the course to themselves. According to the article, there are usually between one and two groups slated to play the track on any given day.

To arrange a tee time, one must contact caretaker Greg Harless, who handles both the greens keeping and pro shop duties on the premises, including letting golfers onto the grounds and directing them to the first tee’s general whereabouts.

Unlike every other golf course in history, the Sheep Ranch is intentionally closed during the summer months to save on irrigation and maintenance expenses.