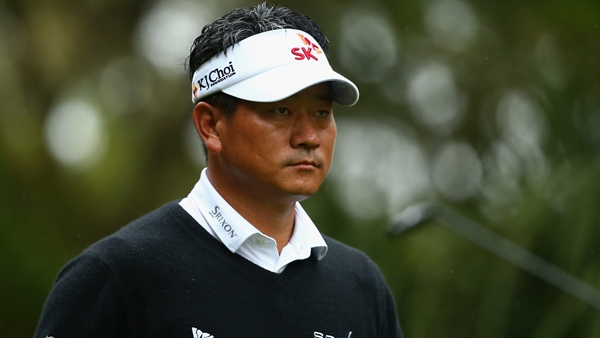 Choi shot a 67 to get to 5-under 137, one stroke ahead of Robert Allenby and two in front of a group led by former world No. 1 Luke Donald as the second round was suspended because of heavy storms.

Allenby was among 65 players still on the course when the rain hit Harbour Town Golf Links. Officials delayed the round shortly before 3 p.m. and then sent everyone home until Saturday morning after waiting through about 90 minutes of steady, heavy rain.

Allenby has 13 holes to finish when play resumes Saturday morning.

Donald shot a 69 and joined Billy Hurley III (69) and first-round tri-leader Scott Langley (73) in the clubhouse two shots behind Choi. Bo Van Pelt and Ben Martin were also at 3 under early in their rounds.

Kuchar, who tied for fifth last week at the year’s first major, had a pair of double bogeys on his first six holes before the rains came and stood four shots behind Choi.

Spieth, a Masters rookie who tied for second at Augusta National, had a 74 and was at 1-over 143 – good enough to make the projected cut of 4 over, but well off his opening 69.

Choi was four shots back of first-round leaders Kuchar, Langley and William McGirt at the beginning of the day. Based on his recent play, he didn’t figure to make much of a dent in the cool, drizzly conditions.

But Choi had three birdies on the front nine, including one on the difficult, par-4 eighth hole, to get into contention. He caught Kuchar on No. 16, rolling in a 20-footer for birdie.

Choi’s usual schedule had him return home to South Korea after the Masters to help take care of his three children. However, after hearing for years how Harbour Town might suit his game, he decided to play the South Carolina course.

“If you just hit it beneath the trees, it’s a good course to play,” Choi said. “It has very small targets and this course is working well.”

Kuchar, the world’s sixth-ranked player, probably wished the storm had arrived sooner. His tee shot found water on the par-3 fourth hole for a double bogey. He sent his drive out of bounds on No. 6 to drop two more shots.

Kuchar opened with a steady performance – Thursday’s 66 was his lowest career round at Harbour Town – just a few days after contending in the Masters.

He’ll see if he can find that game once play resumes. His bad start didn’t seem to bother him much. He smiled after hitting his provisional drive on the sixth hole, and then talked about the good time he and his family were having at Hilton Head.

“Chasing my youngest around the beach, so had some fun this morning,” Kuchar said. “It’s going to be lots of games and some movies maybe the next couple of days.”

Allenby jumped into second after birdies on the first and second holes and was glad to get out of the inclement weather.

“It’s not fun when it’s blowing 20 miles an hour every different direction and it’s raining at the same time,” he said. “So it was nice get out of there.”

Donald is coming off a disheartening Masters (he shot 79-70 to miss the cut), but he generally plays well at the RBC Heritage. He’s had four top threes in his past five appearances and, with his 69, broke par for the 17th time in his last 22 rounds here.

“It’s a good course for me and my results have certainly showed that in the last few years,” Donald said.

David Hearn was thru 11 holes of his second round and is sitting on the projected cut line of 4-over.

Stephen Ames only got four holes in on Friday. He’s sitting at 5-over 147 but has plenty of holes left to get below the cut line.