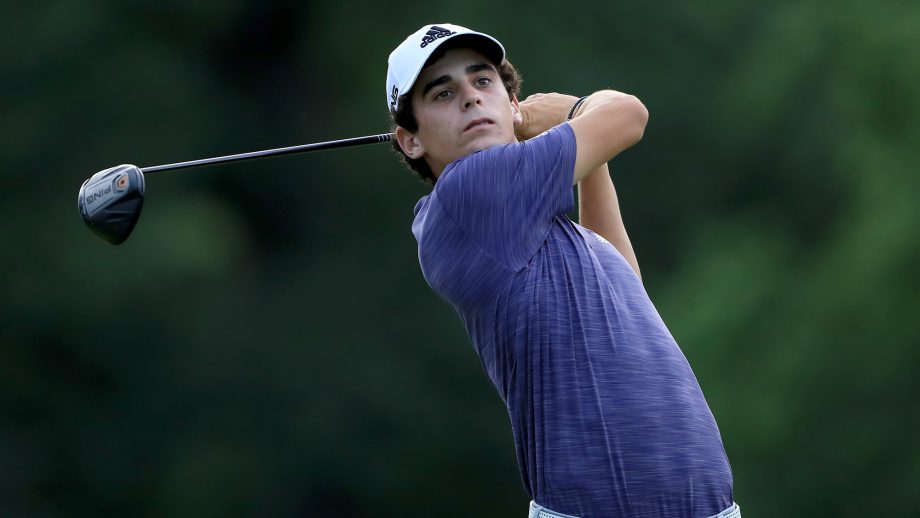 DUBLIN, Ohio – Joaquin Niemann could figure out where Tiger Woods was on the golf course from the mass of people following him a few groups ahead, and he had a pretty good idea what he was doing from all the noise, at least before Woods put a putter in his hands.

“There was so many people,” Niemann said.

The few that stuck behind for the 19-year-old Chilean saw another good show.

In his fifth start as a pro, Niemann finished with two birdies over his last three hole s for a 4-under 68 and a share of the lead with Kyle Stanley, who had a 66. He finished with an 8-foot birdie on the 18th hole.

Woods made Muirfield Village sound like a rock concert until storms arrived. He holed out with a sand wedge from 97 yards for eagle on the par-5 11th hole, and then his tee shot on the par-3 12th struck the flag waving in the wind and settled 6 feet behind the hole.

And then he sat out a weather delay that lasted just under 90 minutes, and he missed four putts under 7 feet the rest of the way.

And he was six shots behind with nearly two dozen players in front of him.

Stanley, who won the Quicken Loans National last summer, was atop the leaderboard for much of the day and was starting to pull away until a poor tee shot at No. 6 led to bogey. He finished with a par save from just off the ninth green and reached 11-under 133.

On the other side of the course was Niemann, the No. 1 amateur in the world and Latin American Amateur champion who wanted to play the Masters before turning pro. He looks his age when his braces shine every time he smiles. He plays beyond his years.

Already with a pair of top 10s on the PGA Tour, Niemann now finds himself in the last group going into the weekend at the tournament Jack Nicklaus built, and he doesn’t appear to be the least bit nervous about being there.

“It feels really nice to be on top of the leaderboard,” he said. “It does feel really nice for tomorrow.”

Byeong Hun An had a 67 and was two shots behind.

Among those three off the lead were Hideki Matsuyama (71), who earned his first PGA Tour title at the Memorial three years ago, and Jason Day, a former world No. 1 who is a member at Muirfield Village and has never come close to winning. Perhaps this is the year. Day had never been within five shots of the lead going into the weekend at the Memorial, and he’s not sure why.

“I think I just (stunk) on it for a long time,” Day said. “I don’t think there was anything, any reason why. I just didn’t really play well. But I’m hopeful I can change that because I feel different this year.

“I want to play well in front of my family,” he said. “Family and friends come out and I want them to be yelling in the crowd when I’m in contention.”

Henrik Stenson and Justin Rose each had a 66 and were in the group at 7-under 137, while Dustin Johnson was among those at 138, even though he has played the par 5s in just 1 under for the week.

Johnson and Rose each have a chance to get to No. 1 in the world. Justin Thomas, in his debut at No. 1, overcame a pair of early bogeys for a 69 and was at 3 under.

Adam Hadwin (70) of Abbotsford, B.C., was tied for 69th at even par. Mackenzie Hughes of Dundas, Ont., missed the cut after shooting a 73.

Woods was another shot behind, and it looked as though he was about to post his lowest score of the year. He made the turn in 33 with a 15-foot birdie putt on No. 9, and then he made a solid escape from the rough and trees on No. 11 before holing out for eagle.

He missed birdie chances of 6 feet, 4 feet and 7 feet, and then missed from 3 feet for par on the 17th that left him exasperated.

“I missed a lot of short putts, which is something I don’t normally do, which is just frustrating,” he said. “I’ve got to clean that up come this weekend and hopefully, I can get it going. Hopefully I can play well like this on the weekend and I’ve got a great chance of winning this tournament.”

At least he has a chance.

Rory McIlroy made bogeys on both par 5s on the front nine as he tried to finish strong. He had to settle for a 70 and made the cut on the number. That was still better than Jordan Spieth, who finished bogey-bogey for a 72 and missed the cut by three shots.

Since his closing 64 at the Masters, Spieth has finished at least 12 shots behind the winner in his three tournaments and missed the cut in his final event before heading to Shinnecock Hills for the U.S. Open.