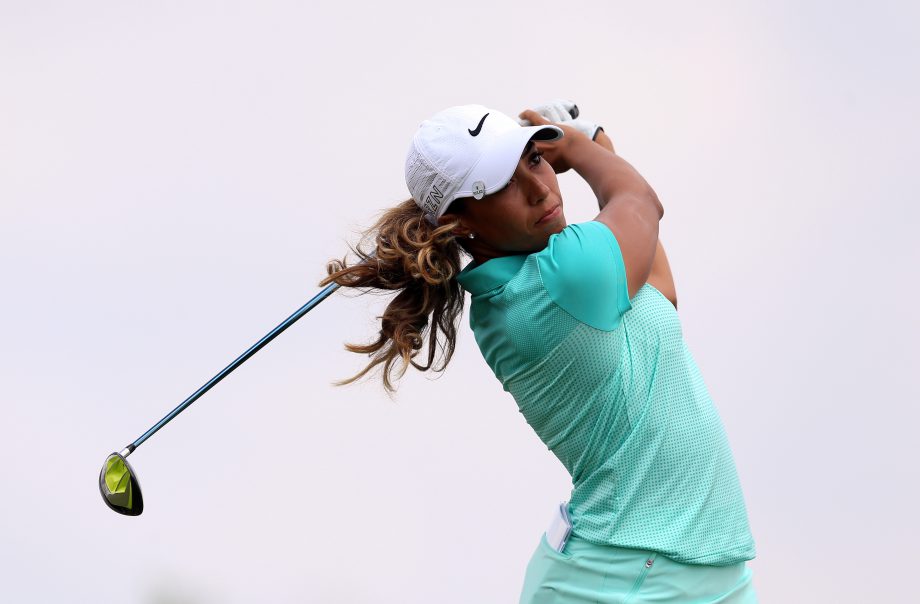 CAMBRIDGE, Ont. – Cheyenne Woods, Cristie Kerr and P.K. Kongkraphan matched the course record at 9-under 63 on Thursday to share the first-round lead in the Manulife LPGA Classic.

Woods, Tiger Woods’ niece, and Kerr tied the Whistle Bear Golf Club record set by Matt Bettencourt and Jon Mills, in the Web.com Tour’s 2005 Canadian PGA Championship. The tournament is in its first year at Whistle Bear after three years at Grey Silo in Waterloo.

Woods had an eagle, eight birdies and a bogey in calm morning conditions.

“It wasn’t very windy today,” Woods said. “I thought it played a little shorter than it had the past few days because maybe the wind was down. So, I think there are a lot of birdies out there. The par 5s are birdie-able, eagle-able, so I think it’s playing pretty good. It’s a nice course.”

The 24-year-old LPGA Tour rookie made a 50-foot eagle putt on the par-5 ninth.

“I played really solid all day,” said Woods, who won the Ladies European Tour’s Australian Ladies Masters last year for her biggest victory. “I had one bogey, which was a stupid three-putt, but overall I played solid. And I think the biggest thing, we were just having fun out there, Jaye Marie (Green) and I were talking the whole day and it was very relaxed, very relaxed atmosphere while we were playing. That’s sometimes when I play my best.”

The 37-year-old Kerr had 10 birdies and a bogey, playing her opening nine in a career-best 7-under 29. She won the Kia Classic in California in March for her 17th LPGA Tour title.

“The course has pretty generous fairways and, I mean, our tour is so good with talent that I knew somebody was going to shoot a low number,” Kerr said. “Maybe I thought not as many people would shoot such low numbers, but there were definitely birdies out there today.”

Kongkraphan, from Thailand, also had 10 birdies and a bogey.

Israel’s Laetitia Beck and Germany’s Sandra Gal were a stroke back.

Sweden’s Anna Nordqvist, the winner Sunday in New Jersey in the ShopRite LPGA Classic, topped the group at 65 along with South Korea’s Sei Young Kim, a two-time winner this season.

Second-ranked Inbee Park, the winner last year at Grey Silo, opened with a 69. Third-ranked Stacy Lewis had a 70, and top-ranked Lydia Ko shot 71.

“Hopefully, tomorrow there will be many more birdies,” said Ko, a two-time winner this year.

Brooke Henderson, the 17-year-old Canadian who was third in the Swinging Skirts in April in California, had a 71. The crowd chanted “Go Canada Go!” and cheered loudly for Henderson

“It was different,” said Henderson, from Smith Falls, Ontario. “The crowd was more in my favor, which was amazing and such an awesome experience. I’m hoping that the next couple days I’ll play well enough so that the crowd’s not just there to see me play but to see me play really well.”

Sister Brittany Henderson opened with a 72.

Alena Sharp of Hamilton, Ont., was the top Canadian at 5-under par 67.