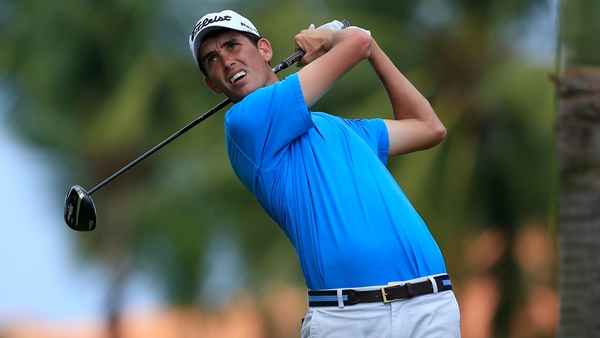 Making his 13th PGA Tour start, the 26-year-old Hadley had four birdies in an early five-hole stretch and also birdied the par-4 14th in wind gusting to 25 mph.

“It was frustrating, to be honest with you, even though I was playing well, just because I hit it so well today and I missed quite a few putts, a lot of putts the last 11 holes,” Hadley said. “But you know what, we’re right where we need to be. I’m leading and that’s great.

“I’s hard to be satisfied with how well I hit it, but we need to keep in perspective that we’re leading and we’re in a great spot for tomorrow.”

“I’m going to go at just about every flag,” Hadley said. “You got to stay aggressive out here. I’ve learned that. For me, if I kind of take the foot off the pedal a little bit, I’ll kind of lose focus and I won’t be as sharp as I would like to be, so I plan on being really aggressive.”

Danny Lee was a stroke back after a 66.

“It was another good day of golf,” Lee said. “I was hitting it really well at the beginning and putting is good. I think everything is going really nicely at the moment.”

Hadley won twice last year on the Web.com Tour, taking the Rex Hospital Open in his hometown of Raleigh, N.C., and the season-ending Web.com Tour Championship. In Raleigh, he began the final round five strokes behind Lee and rallied to beat the New Zealand player by two strokes with a 64.

“I was thinking about that a little bit,” Hadley said. “Danny and I are great friends and we’re going to have a blast. I think we’re playing twosomes tomorrow, so we’ll have a blast out there, and hopefully we can kind of duel it out. Obviously, I would love to come away with a victory.”

Jason Gore and Jonathan Byrd were tied for third at 14 under. Gore shot 66, and Byrd had a 67.

Gore pointed to a recent talk with former basketball star Charles Barkley for his strong play.

“I just met Charles that day, and he goes, `So what’s been wrong the last few years?'” Gorse said. “I said, `You know, I kind of just lost my love for the game.’ He goes, `Well, why?’ I said, `Man, I have a family.’ He said, `Man, I ain’t buying that.’ … He goes, `Why would you not want to provide your family a better life, and doing something you love.’ And it was one of those things, it wasn’t Nostradamus or anything like that. He didn’t break any barriers there, but it did kind of hit a hard string and made me stop to think why would I not want to be better for them and provide better, and lucky to get to do what I do.”

James Driscoll, the second-round leader after matching the tournament record with a 63, had a 75 to drop into a tie for 20th at 9 under.

On the Canadian front, Brad Fritsch leads is tied for 15th after a blazing 67. The Ottawa native is 10-under par and just 6-shots off the pace heading into the final round.

David Hearn of Brantford, Ont. is 20th, a single-stroke back of Fritsch at 9-under.

Stephen Ames of Calgary dropped two spots on the leaderboard after a  71. He’s in 57th spot at 3-under par.