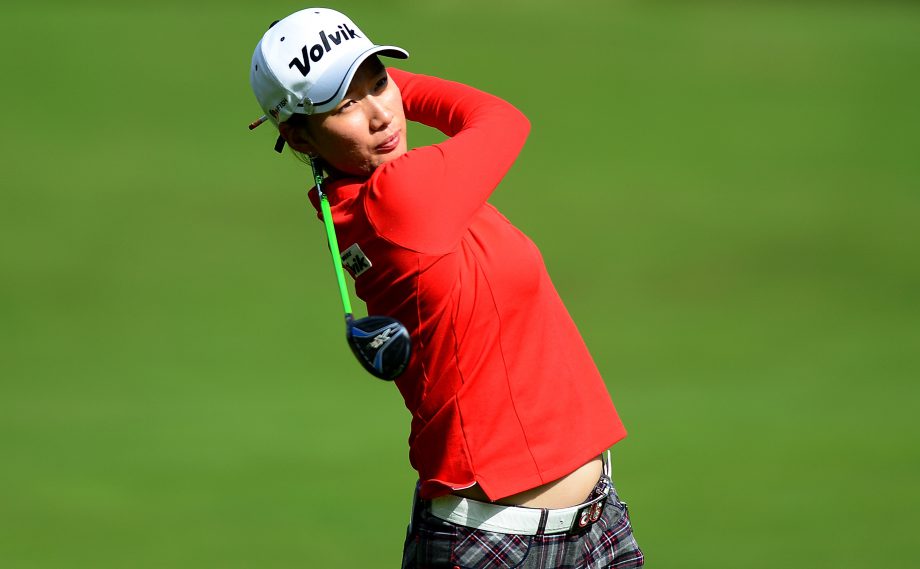 Choi shot a 6-under 66, finishing with a birdie on the par-5 ninth.

“A lot of wind,” said Choi, the South Korean player who won the Marathon Classic winner last year for her first LPGA Tour title. “But my game is good and driving is good, shot was good, so I made a lot of birdies.”

Mozo was 7 under before running into trouble on the par-4 18th. The Spaniard finished with a 68.

Second-ranked Ariya Jutanugarn was four strokes back after a 70 in her bid to win three straight events for the second time this season. The 20-year-old Thai player began her latest streak at the Women’s British Open, and rebounded from a knee injury that forced her to withdraw during the Rio Olympics to win the Canadian Pacific Women’s Open on Sunday in Alberta.

Using a driver in competition for the first time since May, she dropped two strokes on the back nine after birdieing the first three holes and making the turn in 4 under.

U.S. Open champion Brittany Lang, second last year at Whistle Bear after winning the inaugural event in 2012 at Grey Silo, was a stroke back at 67 along with South Korea’s In Gee Chun, Spain’s Azahara Munoz and Sweden’s Dani Holmqvist. Lang holed a lob wedge for eagle on the par-5 third – her 12th hole.

“The course was playing a little bit tricky with the wind and couldn’t get to that par 5,” Lang said. “I actually laid it up a little bit too far left and through. I was like, ‘Awe, should still be OK.” And then when I hit it, it was nice and high and on the right line. And we couldn’t see it. And then my husband and all our friends were up there, and they were screaming, so it was a pretty cool reaction.”

Munoz noted the tournament’s later dates after her bogey-free round.

“I think it’s nicer playing now than in June,” Munoz said. “I think last year was a little cooler the first few days. The course is great. The greens roll really nice, so if you hit a good putt, the ball goes in.”

Top-ranked Lydia Ko had a 70. The 19-year-old New Zealander has four LPGA Tour victories this year.

Defending champion Suzann Pettersen shot a 69 in the group with Ko and Stacy Lewis (70). Pettersen won at 22 under last season in the first year at Whistle Bear after three at Grey Silo.

Canadian star Brooke Henderson matched Jutanugarn with a 70 in their afternoon group.

“The wind really picked up on the back nine. It was kind of difficult,” the 18-year-old Henderson said. “You could see all three of us not really playing exactly the way we wanted just because of the wind and the conditions. But I finished 2 under on afternoon tee time in windy conditions. I’m happy. I’m just excited to tee it up tomorrow where conditions will be a little bit softer and not as much wind.”

Henderson, from Smith Falls in southeastern Ontario, beat Ko in a playoff in June in the KPMG Women’s PGA for her first major title, and successfully defended her Portland Classic title in early July.

Choi has concentrated on improving her driving. She hit 10 of 14 fairways Thursday.

“I worked really hard the last three weeks,” Choi said. “I want to hit straight and strong my drive four days, so I focus on just my driving four days.”

Alena Sharp and Maude-Aimee Leblanc (Sherbrooke, Que.) topped the Canadians at 69. Sharp, from Hamilton, is coming off a career-best fourth-place finish in Calgary at the 2016 CP Women’s Open. Lorie Kane of Charlottetown had a 70, one week after being the 51-year-old was inducted into the Canadian Golf Hall of Fame.