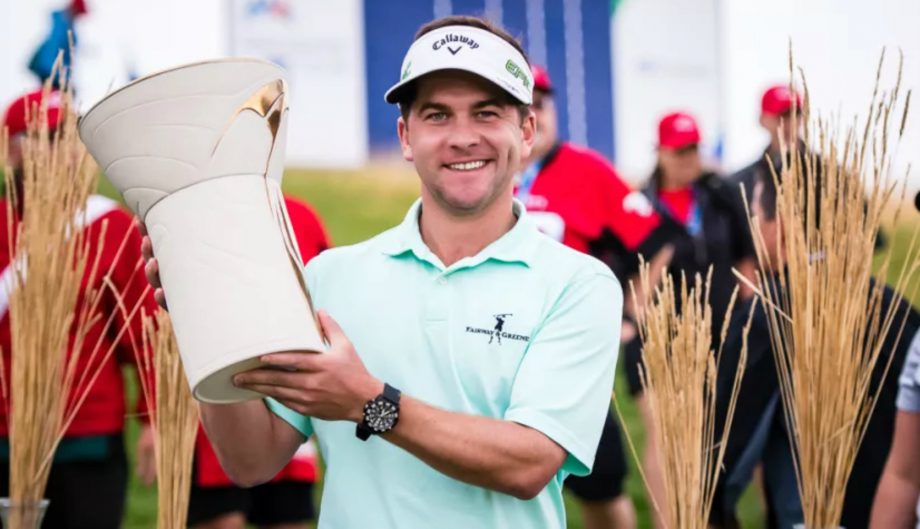 Muncie, Indiana’s Chase Wright shot a 4-under-par 67 to come from behind and win the ATB Financial Classic for his first Mackenzie Tour – PGA TOUR Canada win.

The 28-year-old started the day one shot back of the five 54-hole co-leaders—who were tied at 12-under-par—but got off to a hot start on Sunday, making a 30-foot putt for birdie on the first hole, followed by birdies at hole Nos. 2, 4, and 5. Wright bounced back from a bogey on the par-3 No. 6 with an eagle at No. 7 to make the turn at 5-under, good for a one-stroke lead at that time.

Weather conditions changed significantly as the final few groups approached the 12th and 13thholes—wind speeds in the morning were no more than 17 km/h, but afternoon  gusts reached up to 31 km/h. Wright, however, seemed undisturbed by the change in the elements. He notched six straight pars on Nos. 10-15 and said his par saves on Nos. 13 and 14 were crucial keys to his victory on Sunday.

“The winds that came through, you hadn’t seen them all week,” said Wright. “That was two huge moments. I probably wouldn’t be here if I wouldn’t have gotten those up-and-downs.”

On the par-5, 507-yard No. 13, Wright was left with 180 yards for his second shot, and with the wind conditions, he needed only a wedge for the shot, which flew the green. Wright hit his third shot just inside a hazard and saved par by chipping it to two-and-a-half feet and making the putt. On the par-3, 212 yard No. 14, Wright hit his tee shot into a greenside bunker and made a 7-footer for par.

His mentality throughout the round—and the week, for that matter—did not waver. “I just tried to stay patient and play like it was the first day every day and not really worry about stuff going on around you and how other people are playing,” said Wright.

Wright bogeyed the par-3 16th on Sunday but bounced back on No. 17, sinking a 15-foot putt for birdie, despite needing to back away twice due to the wind. After failing to get up-and-down on No. 18, he signed his scorecard for a 72-hole total of 15-under-par—the clubhouse lead—and waited for the remaining two groups to finish.

“I wasn’t discouraged or anything. I just kept plugging,” said Wright about his final stretch of holes. “I felt really calm most of the day…I’ve seen my name up there [on the leaderboard] all day and I never once thought I let that affect me, and if it did, I made sure that it didn’t affect me more than once.”

Wright finished his final round just before play was suspended at 4:24 pm local time due to lightning in the area. When play resumed at 4:58 pm, South Korea’s Todd Baek was the only player who could potentially force a playoff with Wright, but Baek’s failure to birdie No.18 secured Wright’s first Mackenzie Tour victory.

The win moves Wright into seventh on the Mackenzie Tour Order of Merit, $1,085 behind No. 5 Patrick Newcomb. The top five players on the Order of Merit at the season’s end will earn status on the Web.com Tour for 2017.

“Anybody that knows me kind of knows that I’ve put myself through a lot in the last year and a half,” said Wright, who finished in the top-50 on the Web.com Tour money list in 2014 and 2015 but failed to keep his Web.com Tour card after the 2016 season after missing 15 of 20 cuts. “Coming back here and having an opportunity to get back to the Web.com Tour is awesome, and [I’m] taking advantage of it now.”

Wright was one of six co-leaders at 6-under 65 after the first-round and had the solo 36-hole lead by one stroke over Todd Baek, thanks to another 65 in round two. A one-over 72 in the third round left him one stroke back of the five co-leaders heading into the final round, but his attitude remained positive and persistent.

“I didn’t play that bad,” said Wright about his 72 on Saturday, which also saw wind speeds reach the mid-30s (km/h). “I lost three-and-a-half shots on the greens. My game was right there; I just gave away a few shots. So I knew if I just kept hitting solid shots and putting myself in position, the hole’s gonna get in the way, and it did.”