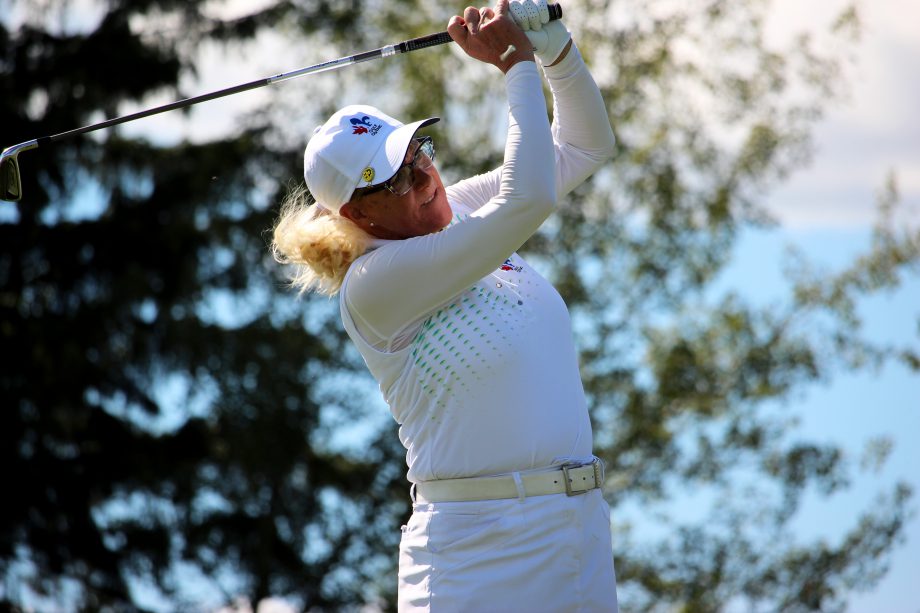 PONOKA, Alta. – Sunny skies and mild temperatures greeted players as the 2016 Canadian Women’s Mid-Amateur and Senior Championship got underway at Wolf Creek Golf Course. Hélène Chartrand capitalized on the fair weather to card a 1-under 71 and lead by a single stroke.

The native of Pincourt, Que., collected four birdies on the day, including two back-to-back on her final two holes to take possession of the lead.

“The course was playing so much better than the first two practice rounds – at least I enjoyed myself around the course,” said the 59-year-old. “It’s tough, the pins were in tough spots at some points. You have to maneuver around some fairways, it’s not easy, it’s very tight. You have to stay patient.”

The welcome conditions arrived following two windy, rain-soaked days. Despite some inclement forecasted in the coming days, Chartrand remains steadfast in her approach to the competition.

“I’ve played so many rounds in my career in the rain, so it doesn’t really bother me. The wind is sometimes tougher than the rain. You have to prepare, you have to stay focused. But it’s the same course for everyone, so I don’t really mind it.”

Chartrand leads the 25-and-over Mid-Amateur, the 40-and-over Mid-Master and the 50-and-over Senior divisions. She claimed the 2013 and 2014 Mid-Master titles, as well as the 2014 Senior championship.

“It gives me confidence that I can do it,” she said, when asked about the experience of being a past champion at this event. “I know the game is there, but you have to make the putts and stay in the present – which is always so classic to say, but it’s so true. But it’s so difficult to do, as well. It’s so easy to project yourself in the future and you don’t want to do that.”

Chartrand singled out her play on the green and stressed the need for similar performances in the coming days if she is to keep finding success.

“I putted extremely well from 3-feet…from 5-feet. Even though I missed two of them, I made several of them, too. I putted really good and that’s what I’m going to try to do; relax, take the tension away from my arms and focus on putting. I think I drove the ball pretty good, too, but putting is key because the greens are so tough.”

Trailing Chartrand by one stroke is Thornhill, Ont., native Judith Kyrinis. The 51-year-old finds herself in a familiar position, having finished runner-up in the trio of divisions last year. Margo Dickinson from Hartland, N.B., sits third in the Mid-Amateur division following a 1-over 73 showing. The trio of Penny Baziuk (North Saanich, B.C.), Terrill Samuel (Etobicoke, Ont.) and Holly Horwood (Vancouver) hold shares of fourth in the Mid-Amateur divisions, as well as shares of third in the Mid-Master and Senior divisions. Samuel claimed victory in the three divisions in 2015 at Sawmill Creek Golf Resort in Camlachie, Ont.

At 2-over, Horwood leads the Super Senior division by three strokes. Anna Schultz of Heath, Texas holds second, while Ruth Maxwell from Dartmouth, N.S., and Albertan Sharon Peart of Red Deer are T3 after matching 79s.

The trio of Baziuk, Horwood and two-time Senior champion Jackie Little of Port Alberni, B.C., lead the inter-provincial team competition at a combined 4-over 148. Teams Ontario and Quebec trail the 36-hole competition played concurrently with the championship’s first two rounds by one and two strokes, respectively.

Following the opening two rounds, the field will be reduced to the low 70 and ties from the senior division. In addition, all players eligible for the Mid-Amateur and Mid-Master divisions posting 36-hole scores equal to the final qualifier in the Senior division will advance to the final round of competition. A minimum of 10 Mid-Amateur and five Mid-Master competitors will make the cut.

The 2016 Canadian Women’s Senior champion will gain an exemption into the 2016 U.S. Senior Women’s Amateur Championship to be played at Wellesley Country Club in Wellesley, Mass., from September 17-22.

The second round of competition will see the first group of competitors tee off at 7:30 a.m.

Additional information from the championship can be found here.