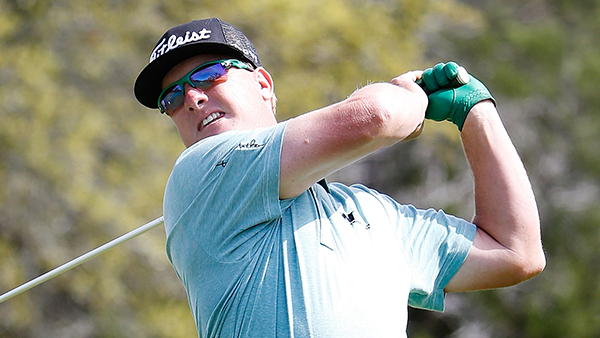 SAN ANTONIO – Charley Hoffman took advantage of calmer afternoon conditions to take the first-round lead in the wind-swept Texas Open, shooting a 5-under 67 on Thursday.

After wind gusts threatening 40 mph pummeled the morning starters, Hoffman faced steady 15 mph wind in the afternoon at TPC San Antonio. He had the lone bogey-free round, birdieing Nos. 2, 3, 9, 11 and 17.

The winner last year in Mexico at the start of the wraparound season, Hoffman has eight top-10 finishes in nine appearances in San Antonio. He was second in 2011 and third in 2013.

“I don’t know the answer to (the success here),” Hoffman said. “Visually, the course sets up nice for me off the tee. It was just a pretty low-stress round for me.”

Aaron Baddeley was second after a 68. The Australian had a remarkable birdie on the par-4 17th when he snap-hooked his drive deep into thick woods, went back to the tee and holed out from 336 yards.

“That was crazy,” Baddeley said. “I hit it, started walking, and the crowd starts going nuts. So, I’m `Wait. I just made birdie.’ It rolls up and goes in.”

Max Homa had a 69, and Phil Mickelson and Ryan Palmer shot 70.

Mickelson, winless since the 2013 British Open, lost the clubhead off his 8-iron when it came flying off while he hit from a fairway bunker on the 12th hole.

“That was weird,” Mickelson said. “But I thought it was playable out there, for the conditions. It’s nice, selfishly, to be on the good end of the tee times in the afternoon. It really looked tough for the guys in the morning.”

With gusts reaching 38 mph early in the day, no one with a morning tee time managed to break par. Only Matt Kuchar and Cameron Percy matched it, and conditions might have been worse if not for maintenance crews slithering hoses onto some of the greens to water them down.

The stroke average for the morning wave was 78.61 and the overall average was 75.9.

From the 69 players in the morning, 23 failed to break 80. Jim Furyk and Dustin Johnson managed to keep it in the 70s, but they had their struggles with the wind.

Furyk opened his day with a 52-foot birdie putt, but he shot 76. Johnson had a 78, his worst since shooting a first-round 80 before withdrawing last year from the Houston Open.

U.S. Open champion Martin Kaymer had a two triple bogeys in an 82.

Sam Burns, an 18-year-old high school senior from Sherevport, Louisiana, who earned a spot in the field by winning the Junior PGA Championship last summer, carded an 89 with a quadruple bogey at No. 9.

Hoffman took the lead when he drove near the collar of the 17th green, chipped up and made a 6-footer for birdie.

“I got lucky that when it was blowing hard, my first four holes were downwind,” Hoffman said. “I was able to birdie a couple of them. The wind started to die down a little bit at No. 5, and I felt comfortable.”

Graeme McDowell was one of three players from the morning wave who withdrew while shooting high numbers, citing injuries. McDowell, the 2010 U.S. Open champion, said his left ankle and foot were bothering him when he pulled out after a 5-over 41 on his first nine. Sang Moon Bae (back) was 6 over through seven, and Colt Knost (thumb) had it at 9 over through eight with a quadruple bogey at No. 3.