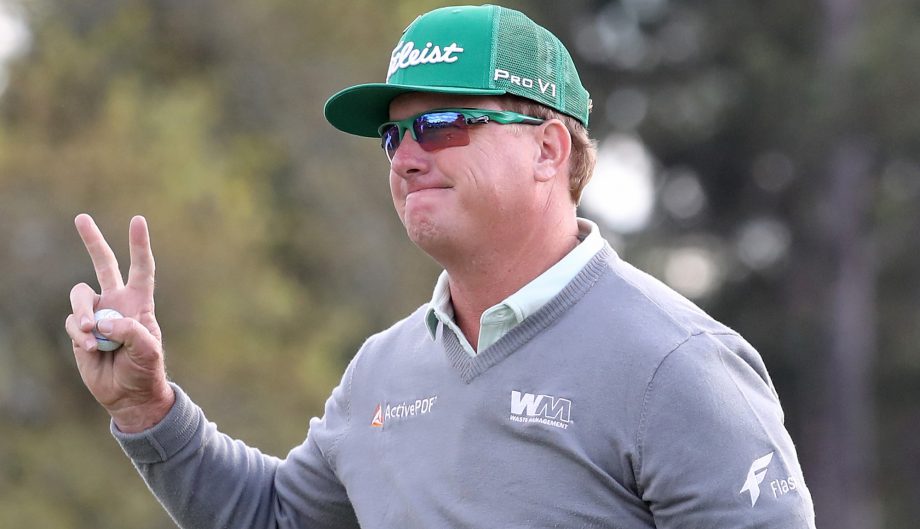 AUGUSTA, Ga. – Dustin Johnson withdrawing from the Masters was shocking enough. Then Charley Hoffman delivered a surprise of his own.

In a raging wind that left most players celebrating anything around par, Hoffman ran off seven birdies over his last 11 holes Thursday for a 7-under 65 that gave him a four-shot lead over Masters newcomer William McGirt.

So tough was Augusta National in gusts that approached 40 mph that Hoffman and McGirt were the only players who broke 70. Hoffman didn’t have reason to believe he would be one of them after a pair of three-putt bogeys early in the round.

“After that, I can’t remember missing a putt,” he said.

Lee Westwood, who has the credentials as the best player to have never won a major, ran off five straight birdies late in the afternoon and salvaged a 70. Only eight other players broke par, a group that included Phil Mickelson, Olympic gold medallist Justin Rose and Sergio Garcia.

Rory McIlroy, needing only a green jacket to complete the career Grand Slam, used a nifty short game to stay in the mix. He saved two tough pars after missing the green in the wrong spots on Nos. 10 and 11, ran off three birdies in the middle of the back nine, and closed with another good par save for a 72.

Johnson never got a chance to see how he would fare.

Just under 24 hours before the world’s No. 1 player was to set out in search of a fourth straight victory, he was headed downstairs at the home he is renting to move his car in a downpour when he slipped while wearing socks and landed on his left elbow and lower back.

He tried to play. He wanted to play. Even after warming up, when he felt pain upon impact on two out of every three swings, he headed to the putting green to give it a shot. But that’s as far as Johnson got. Instead of going to the first tee, he took a sharp right toward the clubhouse and soon was on his way home.

“I can’t do it,” Johnson said. “I don’t feel there’s any chance of competing.”

Adam Hadwin of Abbotsford, B.C., shot 3 over in his Masters debut while 2003 winner Mike Weir of Brights Grove, Ont., was 4 over. Mackenzie Hughes of Dundas, Ont., also in his debut, shot 79.

There have been four other players at No. 1 in the world who didn’t play a major. But none as abruptly as this when at the top of their game. Johnson had won his last three tournaments and was the betting favourite at the Masters.

Worse yet, he expects his back to feel good enough to play by the weekend.

“If it would have happened on Monday, I don’t think we’d have any issues. But it happened Wednesday,” he said. “To have a freak accident happen, it sucks. It sucks really bad.”

Not having Johnson around didn’t make the Masters any easier.

The wind was so strong that it blew golf balls some 6 feet on the greens as Adam Scott and defending champion Danny Willett were getting ready to putt.

The par-5 15th hole, historically the easiest at Augusta National, was the ninth hardest because of strong gusts and a back pin. No need to explain that to Jordan Spieth. One shot spun back into the water. Another shot went well over the green. He made a quadruple-bogey 9 and shot 75.

“If you catch the wrong gust at the wrong time, then you look stupid, like I did on 12,” Thomas Pieters said. “But that’s just Augusta, I guess.”

Pieters reached 5 under until a pair of double bogeys on the back nine, including the par-3 12th, that sent him to a 72.

McGirt, who qualified for his first Masters by winning the Memorial last year, thought he had a good omen when he saw Jack Nicklaus on Wednesday and the six-time Masters champion told him that Augusta and Muirfield Village had enough similarities that McGirt would be fine.

He made only one bogey, had a few tough par saves and a few birdies and shot 69.

Right about the time McGirt was talking about how cool it was to see his name atop the leaderboard, Hoffman birdied the 14th to reach 4 under. He picked up another birdie on the 15th with a delicate wedge shot. His 7-iron on the par-3 16th ran down the ridge to a few feet for a third straight birdie. And feeling like he could do no wrong, Hoffman hammered a pitching wedge to 3 feet on the 17th for a fourth straight birdie.

His approach to the 18th was headed for the bunker when it hit the side of it by a few inches and caromed onto the green. His 15-foot birdie missed by an inch.

“I step on this property and it just feels special,” Hoffman said.

It helps to see the ball go into the cup.