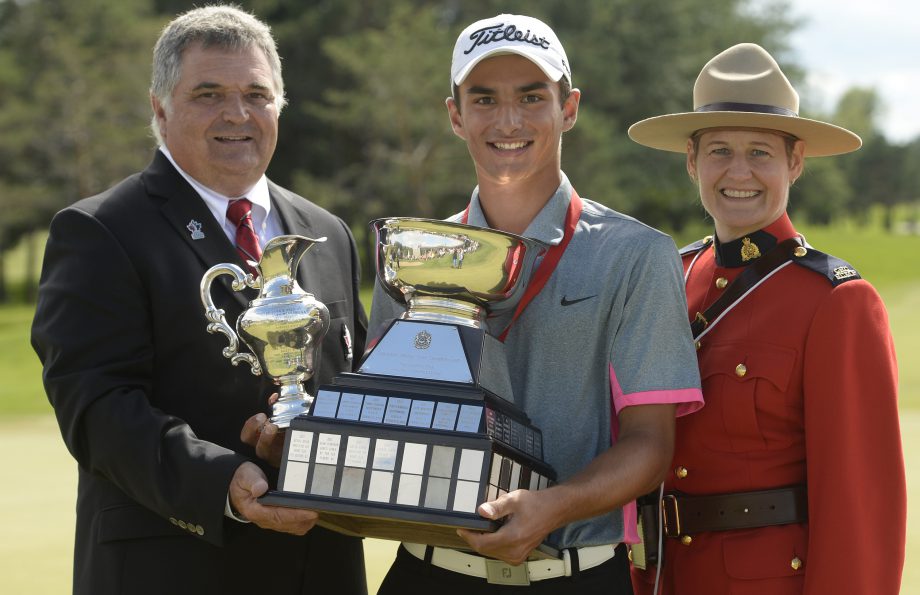 “I feel I played really well. I hit some pretty good shots and made some great saves for par, as well as, some birdies,” reflected the 16-year-old. “My game plan was just to stay focused on the process and play one shot at a time. With the wind this week and the challenging greens, par was a good score.”

He is the national championship’s first winner from Quebec since André Nols in 1976. The tournament’s Juvenile Division was introduced in 1970; Bélanger is the seventh champion to capture both the Junior and Juvenile titles in the same year. Amongst that group, he is the third to do so in his home province.

“It feels really special,” said Bélanger when asked about returning the championship to Quebec. “It has been 39 years since the last winner was from Quebec, so it just feels great. I am so happy. I’ve worked very hard during the past two years to be able to perform at this level.”

Bélanger carded three birdies and an eagle on the day to equal his 1-under 71 performances in the first and third rounds. Despite his consistent play, the Québec City, Que., native needed an extra hole to secure the victory. Maxwell Sear of Unionville, Ont., made a furious charge to force the playoff, tallying four birdies across the back nine with the last coming on the final hole to match Bélanger at even-par for the tournament.

Raphaël Lapierre-Messier of St-Jean-Sur-Richelieu, Que., and Henry Lee of Coquitlam, B.C., finished tied for third place. Lapierre-Messier, who entered the final round in a three-way tie for second, shot 2-over 74 to complete the competition at 3-over 291. The 17-year-old Lee recorded two eagles on holes 11 and 14 to move up from seventh place.

Placing second in the Juvenile Division and fifth overall was A.J. Ewart. The product of Coquitlam, B.C., shot a final-round 74 and finished four strokes shy of the winner. Fellow British Columbian Tristan Mandur of Mill Bay, B.C., rounded out the Juvenile Division’s top-3 at a combined score of 296.

With the victory, Charles-Éric Bélanger has secured a place in the 2015 Canadian Men’s Amateur Championship. While excited for the opportunity, he plans to maintain a calm demeanor. “I’m just going to have the same plan as this week:  focus on hitting fairways and greens and then I will see the result at the end of the week. I’m not putting any added pressure on myself because I won this week. I need to stay focused on the process.”

Bélanger joins 265 competitors vying for the historic Earl Grey Trophy at the 2015 Canadian Men’s Amateur Championship. The event in Toronto will be co-hosted by Weston Golf & Country Club and The Lambton Golf & Country Club from August 8-13. Details regarding the 111th playing of the world’s third-oldest national amateur championship can be found here.