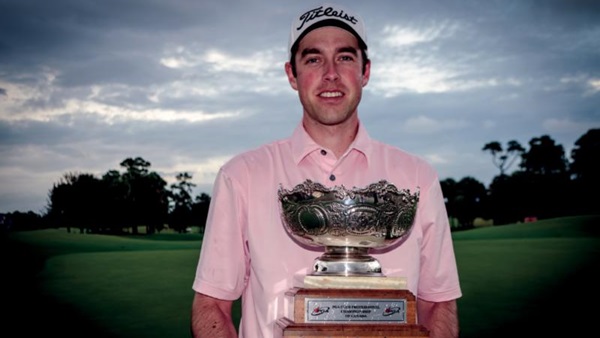 Adam Chamberlain faced a three-shot deficit entering the final round of the Titleist & FootJoy PGA Club Professional Championship of Canada, but by the time he holed his final putt on No. 18 for par, the 31-year-old head professional from Gowan Brae Golf Club had secured the title, besting Danny King by two-shots.

“I’ve been fortunate enough to come down here for the last four years and I’ve realized that I’m able to compete with these guys, but if you would have told me I’d be holding the trophy right now at the start of the week, I’d say you were probably lying to me,” Chamberlain admitted after the round. “It’s been an awesome week with my two great playing competitors the first two days and playing with Danny and Marc (Hurtubise) today was just fantastic.”

When the final group teed off Wednesday in Port St. Lucie, Fla., on the PGA Golf Club’s Ryder Course, Chambly Golf Club’s Marc Hurtubise led at 10-under, three-shots better Chamberlain and four strokes over King. However, by the ninth tee, Chamberlain had climbed to 10 under, pulling even with the 50-year-old from Chambly, Que.

Chamberlain says he really didn’t get into the mindset of playing heads up against Hurtubise for the final 10 holes.

“I really wasn’t thinking it was heads up. I didn’t really know what was going on around us, or if anyone was going really low,” Chamberlain says. “I was just trying to take it one hole at a time and I made a couple par saves and had some chances to make some birdies coming in that didn’t quite drop, so I just kept grinding it out.”

As it played out, it would come down to Chamberlain leading by two over King on the last (after Hurtubise made double-bogey on the 17th) hole of the championship.

“On No. 18 I thought I hit a good drive, but it just caught the bunker on the right,” Chamberlain recalls. “I couldn’t get to the green from where I was because there was a huge lip on the bunker, so I just wedged it out short of the green. I had 54-yards left with a little downhill lie that would help it skid and I hit it to eight or 10 feet.”

“I had a straight-in putt–I couldn’t figure out if it went left or right, though. But as my dad always said, if you can’t figure it out, just hit in the middle and there it went.”

King, who celebrated his 46th birthday Tuesday, finished alone in second for the second-straight year at 7-under-par 209. Dave Levesque (Club de Golf La Prairie) and Matt Peavoy (Tamarac Golf & Country Club) finished T3 at 6-under-par 210. 2012 PGA Championship of Canada winner Eric Laporte (Club de Golf Montcalm) and Hurtubise rounded out the top-five at 5-under-par 211. In total, 23 of the 71 players who made the cut finished the 54-hole national championship at even-par or better.

With his win, Chamberlain earned $12,000 and jumped to No. 33 on the PGA of Canada Player Rankings presented by RBC.