Céleste Dao: On the Rise 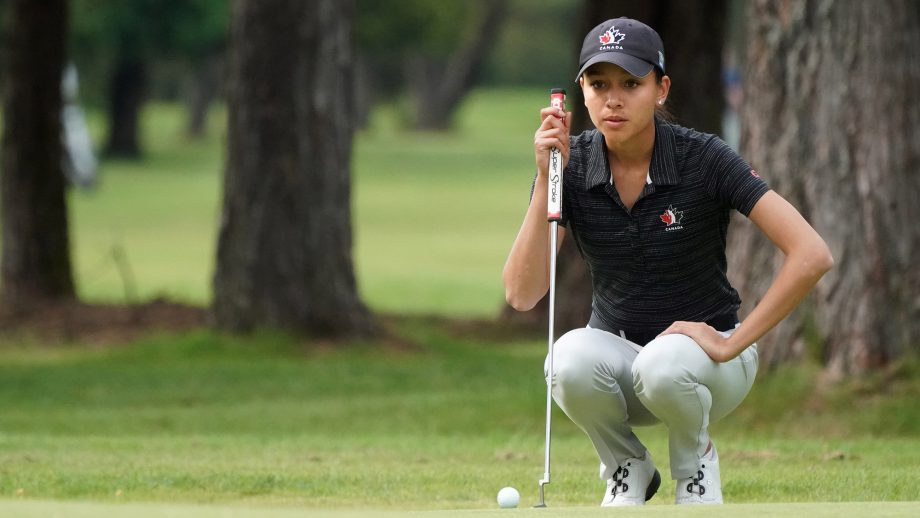 Céleste Dao recently turned 18 years old in March but she is already regarded as one of Canada’s top golfing prospects.

And just earlier this month, she won a qualifier in Boston to earn a spot at the upcoming the U.S. Women’s Open Championship – for the second consecutive year.

As she looks ahead to competing in perhaps the most prestigious tournament in women’s golf later this week, the second year member of the National Team Program took some time to reflect on her journey and her humble beginnings in Notre-Dame-de-l’Île-Perrot, Que.

“My dad, Duc, introduced me to golf when I was about three and a half years old. My dad was passionate about the sport as he just loved golf. We had nets and a mat in our garage and I remember just hitting off the mat,” she remembered fondly.

As Dao was growing up, she competed in a number of sports besides golf – notably soccer, tennis, swimming, and snowboarding.

“My parents put me in a lot of sports to see which one I liked the most,” she pointed out.

Young Céleste first realized she had a special talent for the game of golf at the age of 11 when she qualified for the Optimist Golf tournament in Florida.

“It was the first time that I got to play in tournament outside of Canada,” she noted.

“I had never played in Florida before and I remembered that it was so humid. I shot super high but I learned a lot from it and I really enjoyed the experience,” she recalled.

“I realized at that moment that golf can take me to other countries – and I loved travelling,” added Dao, who at the time was focusing her energy on both golf and soccer.

A year later, at age of 12, she decided to dedicate her time to golf – and she has not looked back since.

The five foot nine inch rising young Canadian golfer says her success on the golf course would not be possible without all the support away from it.

“My dad is still one of my coaches today and has always been very supportive. He really knows my swing and ever since I was young he has come to my lessons. He also follows me during my rounds so we could have a briefing afterwards,” said Dao.

“My mom, Annie, may not know as much about the technical aspects of golf but she’s always been there to provide support – kind of like a mental coach. And my younger brother, Malik, also plays golf, and so we would often work on our games together which makes it fun for both of us.”

Dao says the entire family was able to share a unique and special moment last year when she won the Mexican Junior Girls Championship.

“The last round of the tournament was on my dad’s birthday and I was thinking I really wanted to win this for him.  I was six shots back of the leader and came back to force a playoff; and then won the tournament. I gained a lot of confidence from that victory,” she recalled.

“My dad was really happy and after he was telling me how it was the best birthday present ever.”

The 2018 Canadian Junior girls champion also credits her time on the National Team Program for taking her game to the next level.

“It’s made a huge difference in my game. We have training camps regularly where we are able to practise with the best in Canada. Also, we have the chance to compete in tournaments around the world against the best juniors and amateurs,” said Dao.

She adds that it’s an inspiration to know eight-time LPGA Tour winner, Brooke Henderson, is a graduate of the program.

“Brooke has long been an inspiration to me because I’ve seen her win all those tournaments at such a young age. So knowing that she went through the same program just gives me confidence and motivation.”

Training out of Bear Mountain Resort in Victoria, B.c., Dao is grateful to have the opportunity to work with highly respected coaches and experts that provide support in all aspects of the sport from technical to physiotherapy, mental performance and nutrition.

“All our coaches are amazing and very knowledgeable; and our head coach, Matt (Wilson), has been awesome. He gives me great technical support and always gives me great advice before tournaments,” said Dao.

“We have five junior boys and five junior girls working on our games and pushing each other each day to get better and better. It’s just an incredible program and definitely supports us in our goals to reach our potential,” she added.

According to Matt Wilson – the head coach of the national junior girls squad –  Dao is doing all the right things to reach her potential on the golf course.

“She’s worked really hard on her putting over the past couple of years and she’s progressed a lot in terms of the way she prepares for competition,” he pointed out.

Wilson says Dao is a star on the rise and is quick to highlight the keys to her recent success.

“She’s extremely long and hits the ball solid. The quality of her strike is superb. In addition, she also has a wonderful short game. I believe she’s got a very bright future ahead,” he said.

“Also, Céleste is dedicated to improving her game each day. She has a great attitude and is an excellent student and a quick learner.”

On the topic of learning, the 18-year-old Dao has committed to the University of Georgia for September.

“It was the first university that I visited and I was able to connect with the coach which is very important. The campus is just gorgeous and the practice facilities are great,” Dao said.

The Canadian junior standout hopes to continue her success in the NCAA; and has visions of turning pro and competing at the highest level one day.

But for now, the 18-year-old junior squad member is squarely focused on the U.S. Women’s Open.

“Last year, I didn’t do well, I shot in the 80s. But it was super fun and a great experience to play with the best pros in the world and I was able to learn so much,” said Dao.

“This year, I’m just looking forward to playing better. I will definitely be better prepared and I think the experience from last year will help me a lot.”