Céleste Dao leads after second round of Canadian Junior Girls 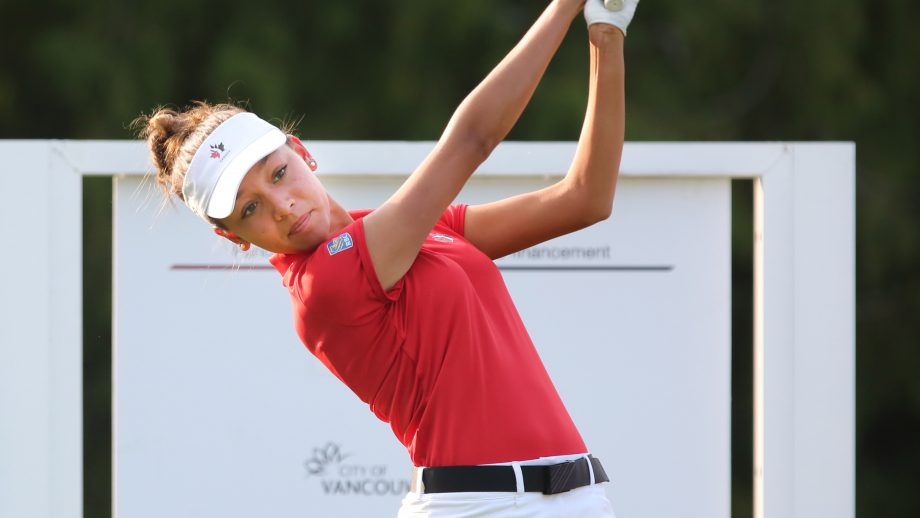 **Tournament update – Player Disqualification: At the completion of the second round of the Canadian Junior Girls Championship at Beach Grove Golf Club in Tsawwassen, B.C., a total of 70 players had made the cut at 21-over par (165).

It was brought to attention of the Tournament Committee late in the evening on Wednesday that Ellie Szeryk of London, Ont., who was sitting alone in second place in the Junior Girls Division and leading the Juvenile Girls Division at 1-under (143), had signed for a score lower than she had taken. As part of the due diligence, the Tournament Committee reviewed the scorecard with Szeryk personally, which ultimately resulted in a penalty of disqualification.

A total of 69 players will now continue to compete in the final two rounds of the Canadian Junior Girls Championship. A link to updated scoring and third round pairings is here.

TSAWWASSEN, B.C. – Céleste Dao carded a 2-under-par 70 to jump into the lead after the second round of the Canadian Junior Girls Championship at Beach Grove Golf Club.

The Notre-Dame-de-l’Île-Perrot, Que. native was one of two players, again, to shoot under par. She started the day off strong firing three birdies on the first three holes. She made the turn at one under and would go on to bogey holes 10 and 12 to sit at even par.

Dao approached the 10th green after over shooting from the fairway. She made a beautiful chip onto the green and the ball sat about 6 feet away from the hole. She lined up her putt for the par and the ball missed the hole, not going as she had planned.

“I missed a short putt. After that I had another bad hole, but after hole 12 I started making birdies and went back to normal, so I was happy,” said the 17-year-old. “The round was up and down, some holes went well, and some others so-so. So, I’m happy.”

She finished the day on Wednesday carding seven birdies and five bogeys. Dao heads into the third round in the lead–ahead of fellow Team Canada Development Squad member Ellie Szeryk–by two strokes. She sits a total of 3-under for the tournament.

Ellie Szeryk made a major comeback after firing a 77 in her opening round on Tuesday. Szeryk finished the round with a 6-under 66, the lowest score of the tournament so far.

“It went well, I was pretty relaxed. I had a really good time with my group which I think really helped my score,” said the London, Ont. native. “I had some good shots. I didn’t put myself in a good position off the tee but I managed to have a good approach shot on the par 5s and I made one long putt. It was pretty simple birdies.”

Ellie made the turn at 3-under.

“It’s nice to start off with a clean slate I had a pretty rough first round so hopefully I’m just going to continue the momentum.” she said.

She took the crowd by storm when she carded four birdies in a row on her back nine, sitting 4-under through her last 5 holes.

“I had a lot of lip-outs yesterday, and missed a lot of putts, so I knew that at some point they were going to drop, I didn’t think they were all going to drop at once, so it was a nice surprise,” said the 16-year-old.

Szeryk sits in second and heads into the third round at 1-under 143 for the tournament, leading the Juvenile Girls Championship.

Emily Zhu from Richmond Hill, Ont. sits two strokes behind Szeryk at 1-over 145 in third place. She recorded a 1-over-par 73 in Wednesday’s round.

The cut was set at 21-over-par and 70 golfers will advance to the final two rounds on Thursday and Friday.

Team Quebec took home the win in the inter-provincial team competition after duking it out with Team British Colombia all the way until the final group came in off the green. Team Quebec finished 4-over par for the tournament and Team B.C. finished 8-over. Defending Champions, Team Ontario, finished in third at 15-over.

Click here to view the full leaderboard for the 2018 Canadian Junior Girls Championship.