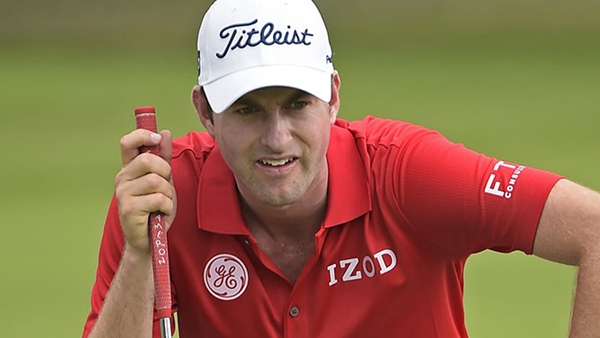 HONOLULU – Webb Simpson had a hard time sleeping on the eve of his first PGA Tour event of the new year. He sounded like a rookie, not a former U.S. Open champion and member of the last two Ryder Cup teams.

That’s about what he felt like with a conventional putter in his hand.

One year from now, Simpson won’t be able to play with the belly putter he has used since 2004 because of the new rule that outlaws an anchored stroke. So he decided to get an early start on the change and go with a conventional putter for the opening round of the Sony Open.

Turns out, there was no reason to sweat.

Simpson made birdie on half of the holes at Waialae, matched the front-nine record with a 28 and posted an 8-under 62 to share the lead with Paul Casey. They were one shot ahead of Camilo Villegas and Robert Streb on a peaceful day just down the beach from Waikiki.

Simpson majored in religion at Wake Forest, and he said that religion “gets thrown around a lot” in sports. But he was serious about it on Thursday.

“Today was a big day for me,” Simpson said. “I was extremely nervous – first round on the PGA Tour with a short putter. But I just had a couple (Bible) verses in my yardage book today that I kept reading, and I stayed calm. All thanks to God for giving me strength to just get through today.

“Today was a hurdle I felt like I needed to get over, and just real thankful.”

Casey returned to these shores for the first time in a decade, and it would be easy to suggest he should never have stopped coming. That would be to ignore that he missed the cut in 2005, and that as a European Tour member, he tends to be halfway around the world in the Middle East this time of year.

Casey gave up his European membership this year because he was being run ragged across the world, has slipped out of the top 50 (making joint membership on two tours difficult) and just had a his first child and wants to be closer to home.

The decision felt easier when he also made nine birdies to share the lead with Simpson. Casey made two birdies to end the back nine, and then piled up three more birdies to start the front nine. And when he rolled in a 12-foot birdie putt on No. 5, he was at 8 under with four holes to play.

Considering that the par-5 ninth is really more like a long par 4, he was close to thinking about a 59. But then he three-putted for bogey on No. 6 and happily accepted a very good start to his 2015 campaign.

“For as long as I’ve been professional, I’ve been a member of the European Tour,” Casey said. “For a long, long time now, I’ve been trying to play both the PGA Tour and the European Tour, and some years I’ve done it brilliantly, and other years I’ve failed miserably, and I just didn’t want to keep putting myself in kind of a position where I’m struggling to fly around the world.”

Thursday was not much of a struggle for anyone. The typical wind has been nothing more than a rumor, and while it looked like paradise under a blue sky, the lack of trade wind has allowed for “vog” – a fog that consists of volcanic ash – to pollute the day.

It just didn’t do anything for the scores.

Rory Sabbatini had a 64 and was two shots behind. Jason Day, Matt Kuchar and Tim Clark were among those at 65. Another shot behind was Jimmy Walker, who is Oklahoma-born, Texas-bred and might want to seriously consider a piece of real estate in Hawaii. Walker, the defending champion, posted his 14th consecutive round in the 60s in the Aloha State, which computes to 54-under par or an average score of 67. No matter the math, it’s good golf.

But no one was more pleased than Simpson, mainly because he was using what felt like a foreign object for the most important club in his bag. He used the conventional putter last year in Japan, but there was something about a PGA Tour event that made him nervous.

“It was one of my best putting rounds I’ve ever had, to be honest,” he said. “I’ve been putting well with it, but it’s easy to putt well at your home course playing with your biddies. So today there was a lot of pressure. Didn’t sleep that great last night, but had a good morning, talked to my wife, good warmup, and it was big to see a few putts go in early. Real thankful for how the day unfolded.”

Brantford, Ont.’s David Hearn was low Canadian after the opening-round following a 67.

Graham DeLaet had a 72. The Weyburn, Sask. native has not finished an event since the Frys.com Open in October of 2014, having to WD twice due a sore neck.