Cao is completely dominant in winning wire to wire 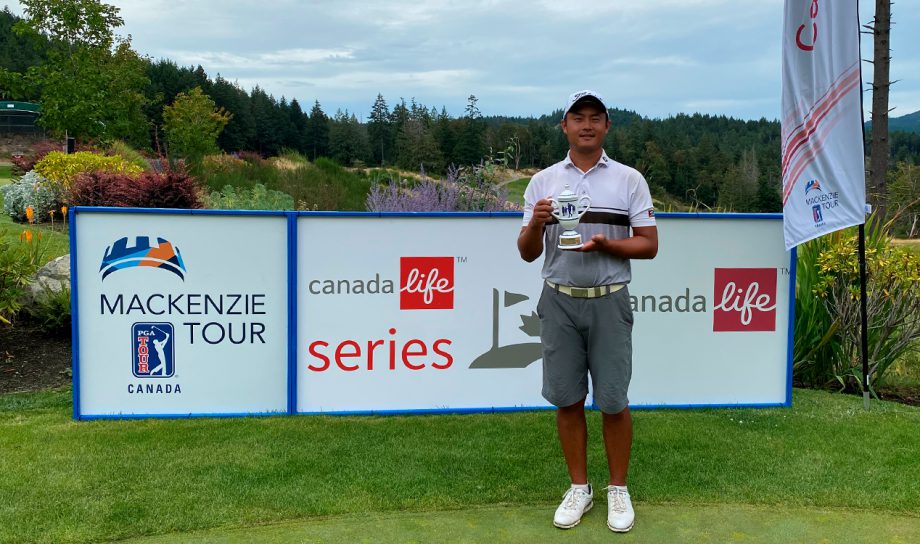 LANGFORD, B.C.—Beginning the day with a five-shot lead, Yi Cao, a Delta, B.C., resident by way of China, let everybody in the field at Bear Mountain Golf & Tennis Resort Community’s Valley Course know he wouldn’t be taking his foot off the gas. Cao birdied his first hole of the final round, shot a closing 66 and was completely dominant for all 54 holes as he won the Canada Life Series at Bear Mountain: Valley Course event by a whopping eight strokes over Joey Savoie and Albert Pistorius. Cao was bogey-free Wednesday, with his 66 his best score of the week. The 29-year-old walked away with the $9,000 first-place check, and he also took over the lead on the Points List, picking up 500 points for the win.

Cao has been the best player through the Series’ first two weeks, never shooting an over-par round during his six tours around Bear Mountain’s two courses, with a win and a tie for third in two weeks’ work. He was a combined 17-under in the two tournaments.

“The biggest event I’ve won was on PGA TOUR (Series)-China, but I have never won going into the final round with a lead. On PGA TOUR China, I started eight shots back, so this was a new and fun experience,” said Cao, recalling the final-round 63 he shot to win the 2018 Chongqing Championship.

The key to victory for the native of Beijing was his ability to conquer the Valley Course’s four par-5s. He played them in 9-under for the week. He gave a first-round signal that the par-5s was where he would do his damage, making birdie on all four par-5s. He birdied the 12th hole all three days, and, naturally, he put a bow on his triumph by making a birdie at the tournament’s closing hole, the par-5 18th.

“My strategy on the par-5s was to just keep my ball in play the first tee shot, and then if I have a good chance to reach the green I’ll go for it. Otherwise I would stay back and play for the green in three shots,” Cao added. “Luckily my putter worked.”

Although Savoie was never in contention, he helped himself considerably with his closing 64 that was, like Cao’s round, bogey-free. Savoie, making his Canada Life Series debut after skipping last week’s tournament, began the day tied for 17th and, like Pistorius, earned 245 points and $3,375 with his runner-up performance.

“It feels good. I didn’t shoot under-par until today. I felt like I made all my birdies and all my good swings during one round for the week,” Savoie said.

The next tournament, at TPC Toronto at Osprey Valley’s Heathlands Course, will be a Wednesday-through-Friday affair, beginning September 2. The players will enjoy a 14-day layoff as they make their way across the country to the Toronto suburb of Caledon.

Did you know Joey Savoie was a member of Team Canada and didn’t turn pro until this season? He has played in five previous Mackenzie Tour tournaments, all as an amateur, making two cuts, a tie for 30th at the 2019 Osprey Valley Open his top outing.