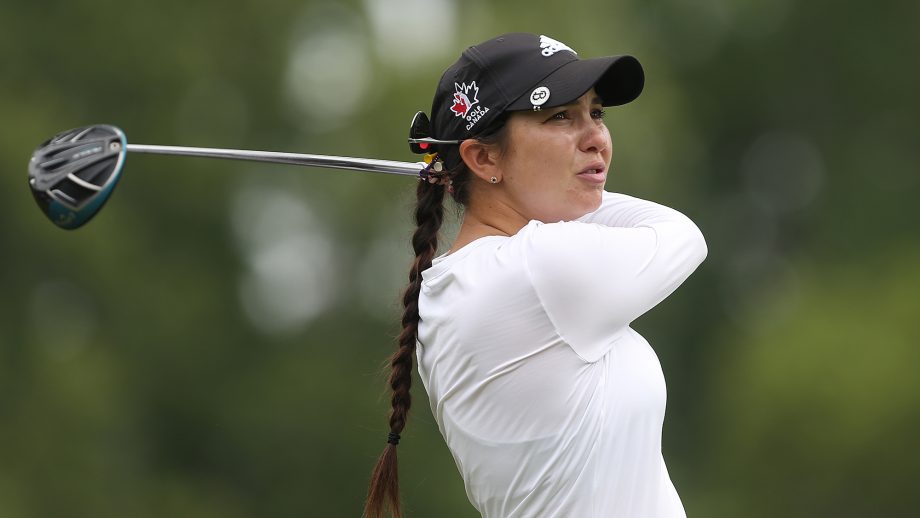 PORTLAND, Ore. – Canadian LPGA rookie Brittany Marchand is one round away from the best finish of her young career.

The 26-year-old Marchand carded a 2-under 70 on Saturday to sit in a tie for fourth place at 10-under heading into the final round of the Cambia Portland Classic.

Marchand placed seventh at the Thornberry Creek LPGA Classic back in July for the only Top-10 finish in her first season on the Tour.

“It’s a good spot. You know, I mean, I didn’t really have too high an expectations of myself this week,” said Marchand. “I wasn’t thinking, ‘I’m going to win this tournament,’ but now that I’m in this position, obviously, that’s my goal. But I don’t feel pressure. I mean, it would be amazing, so if everything clicks tomorrow, that’s great.”

Marchand birdied four of her first eight holes and turned the corner at 12-under, but a double bogey on the par-3 13th dropped her two strokes and she finished with five straight pars.

“I had one bad hole, but actually hit a really good shot. I’m still a little dumbfounded how it went that far over the green,” said the Orangeville, Ont., native.

“Otherwise, I hit a few not great shots coming down the stretch, but had some good saves, so that was good, and played the front nine really well. So overall, I’m pretty happy.”

Georgia Hall pulled away from Minjee Lee late in the third round to take a two-stroke lead into Sunday. Hall is 18 under.

Marchand is tied alongside Ayako Uehara (70).

Brooke Henderson of Smiths Falls, Ont., had a 74 to fall into a tie for sixth at 7 under. The Canadian star, the 2015 and 2016 winner at Columbia Edgewater, won the CP Women’s Open last week on home soil in Regina for her seventh career victory.

Meanwhile, Quebec City’s Anne-Catherine Tanguay shot 67 to move up to 12th spot at 6 under.

Marchand has had some ups and downs at times this season, missing the cut in each of the past three events she’s played including the CP Women’s Open. But she believes she’s got the right frame of mind with 18 holes remaining.

“I think the last week of the Canadian Open … there too much in my head. Put a little pressure on myself, obviously, being Canadian, and had a little bit too much technical stuff going on, so I’m happy with myself this week,” said Marchand. “I feel like I’ve been playing really well all year, and I had a little bit of a slip the last couple weeks, but I’m happy to feel comfortable again.”