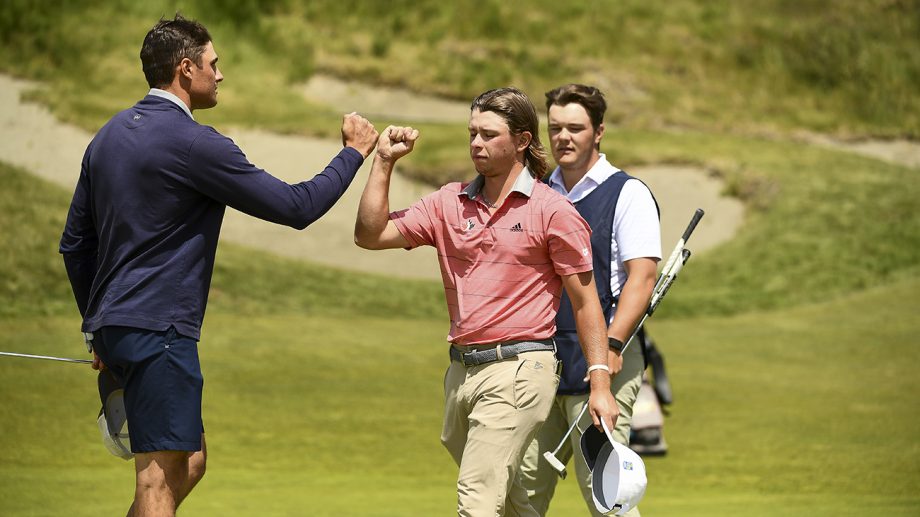 Sam Meek and his teammate Brendan Macdougall celebrate their victory at the 19th hole during the semifinal round at the 2021 U.S. Amateur Four-Ball at Chambers Bay in University Place, Wash. on Wednesday, May 26, 2021. (Robert Beck/USGA)
Lara Kuipers/ Golf Canada

MacDougall of Calgary, and Meek of Peterborough, Ont., came back after being down by two to win their semifinal match in an extra hole earlier in the day on Wednesday.

MacDougall and Meek took the early lead after the second hole, but Coelho and Herrera were up by two by the time they reached the 12th hole.

They were still down by two heading into the last four holes but were able to come back once again and tie it by the time the match arrived at 18. The match would once again be pushed into an extra hole, where Coelho and Herrera won.

MacDougall and Meek have been teammates at the University of Nevada for the 2020-21 season, and McDougall has been a member of Team Canada’s Amateur Squad for the past three years, while Meek was on it in 2020.

As a result of coming second, MacDougall and Meek have received exemptions into the next three U.S. Amateur Four-Ball Championships.

This was the sixth U.S. Amateur Four-Ball conducted by the USGA, and the first to be played at Chambers Bay, in University Place, Wash.

There have been seven USGA champions from Canada, with Judith Kyrinis being the most recent champion when she won the U.S. Senior Women’s Amateur Championship in 2017 at the age of 53.