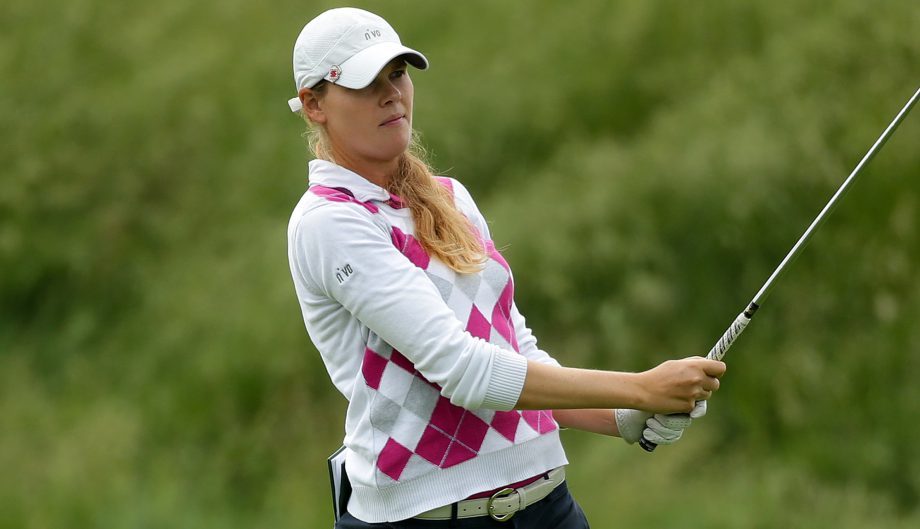 ADELAIDE, Australia – Sarah Jane Smith shot a 6-under 67 in tough, windy afternoon conditions Friday at Royal Adelaide to take a one-stroke lead after two rounds of the Women’s Australian Open.

American Lizette Salas shot 70 to move into a four-way tie for second. She was joined by Pornanong Phatlum of Thailand, who also shot 70, Marissa Steen of the United States, who had a 71, and Sweden’s Caroline Hewwall, who birdied her final three holes for a 69.

“I’d be lying if I said I didn’t think about it,” Smith said of her chance to win her national championship. “Obviously, it would be a dream come true and something that every young Australian thinks about at some point. So to even be in this position right now is pretty exciting. I just need to control my nerves.”

First-round leader Katherine Kirk was in a late share of the lead until she double-bogeyed the eighth hole, her second-last of the day. She was two strokes off the lead in a tie for sixth after a 74.

Maude-Aimee Leblanc of Sherbrooke, Que., had one of the best rounds of the day, a 68 that left her tied with Kirk at 7-under. Brooke Henderson of Smiths Falls, Ont., shot 77 and was at even par, as was No. 1-ranked Lydia Ko of New Zealand after a 75.

Alena Sharp of Hamilton fired a 69 and was tied for ninth while Jennifer Ha of Calgary carded a 78 and failed to make the cut for the third round.

Salas said she recovered well during her round.

“I would be in trouble or miss an up-and-down, on the next hole I’d come right back with birdie,” she said. “I gave myself a lot of opportunities for birdie and I’d miss them on the high side, so that’s something that I could work on on the putting green.”

Salas says she’s “in a good place right now” as she looks forward to possibly representing the U.S. at the Solheim Cup.

“The past two years I’ve been kind of hoping to get better as the year went on,” Salas said. “This year I really wanted to get a good start. Knowing it is a Solheim Cup year, so every tournament does count and I literally took no time off during the off season. It is a huge goal.”

Michelle Wie shot 71 and was at 5-under, four behind Smith. Wie had to overcome back spasms for most of her round, which started with a double-bogey.

“It was pretty bad out there, but hopefully to the physio and get it better for this weekend,” Wie said.

No. 2-ranked Ariya Jutanugarn of Thailand, the LPGA’s player of the year and a five-time winner in 2016, shot a second consecutive 72, and defending champion Haru Nomura of Japan rebounded from an opening 75 with a 69 to make the cut.

Five-time champion Karrie Webb shot 73 after an opening 76 and missed qualifying for the weekend.