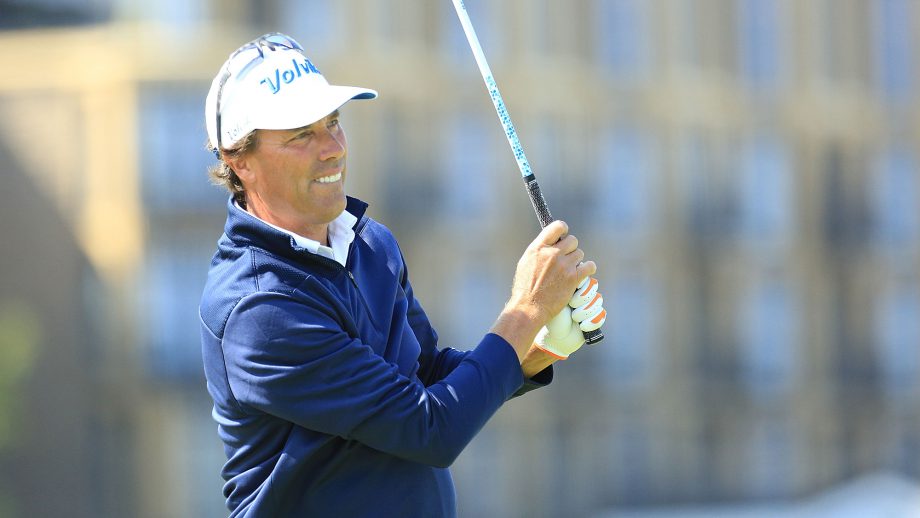 ST. ANDREWS, Scotland – Miguel Angel Jimenez and Stephen Ames were sharing the lead on 9-under when darkness ended play early in the second round of the Senior British Open on Friday.

Ames is among 18 players who must return on Saturday morning to complete their rounds. The golfer form Calgary has one hole to go.

Earlier, pony-tailed Spaniard Jimenez fired a 5-under 67 for a total of 135, one better than American pair Jeff Sluman (68) and Kirk Triplett (71), and defending champion Bernhard Langer (69).

Among three players in the clubhouse on 137 was three-time winner Tom Watson, who remarkably shot his age by posting a 68. On the same 7-under overall mark were Jarmo Sandelin of Sweden and Vijay Singh of Fiji.

“I have been playing well and I attribute it to practicing quite hard before I came here,” Watson said. “I shot 68 on the Old Course under pretty good conditions and I’m very pleased.”

Jimenez’s round was highlighted by an eagle-birdie-birdie run from the 14th.

“I played … super golf,” he said. “It was very difficult with very strong winds on the first nine holes, and then on the back nine I played solid. It would mean a lot to win the Senior Open, especially here at St. Andrews, but some of the top players in the world are here.”

Triplett said he had no strategy for the historic links layout and simply planned to react according to the daily conditions.

“You can take the yardage book and throw it away most of the time”, he said. “Whatever comes, you’ve got to figure out how to play it. I really enjoy links golf. I just haven’t ever been very good at it.”

To the delight of the crowd, Scottish pair Sandy Lyle (66) and Colin Montgomerie (68) were among a group on 5-under 139.

Montgomerie was less pleased with his performance.

“I was 4-under through eight,” he said. “Had 10 more chances, missed them all. So very poor really. No positives at all. It’s all negative in my world.”

Play was delayed for 85 minutes at the start of the round due to thick fog.