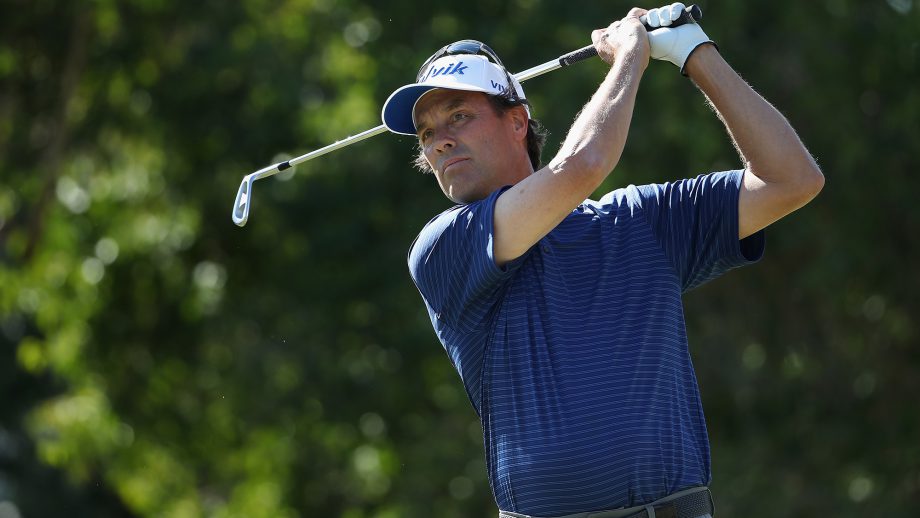 PHOENIX – Bernhard Langer celebrated his fifth Charles Schwab Cup with his wife and friends, a glass of red wine in his hand.

He might consider sending the best bottle to Vijay Singh.

Both walked away winners Sunday when Singh produced the best round of his PGA Tour Champions career, a 10-under 61 that turned a six-shot deficit into a four-shot victory in the Charles Schwab Cup Championship and allowed Langer to claim another $1 million bonus for the season title.

“At age 61 to do it is quite an achievement,” Langer said, holding a glass of red wine on the balcony at Phoenix Country Club. “Maybe there’s another in me.”

It was the fourth time in the last five years that Langer won the Schwab Cup.

This one was out of his hands when he could only manage a tie for 13th in the tournament. That paved the way for Scott McCarron, who had a one-shot lead going into the final round and needed to win the tournament to capture his first Schwab Cup. McCarron faltered from the start, however, opening with a three-putt par and hitting a tee shot out-of-bounds for double bogey two holes later.

Singh blew by McCarron and everyone else at Phoenix Country Club, winning by four shots over Tim Petrovic.

Needing a big finish to try to catch the surprising leader, McCarron hit over the green into a corporate grandstand behind the 17th hole and made another double bogey. He closed with a 72 and tied for third.

“There’s not really much to say today about the round. It wasn’t very good,” McCarron said. “I couldn’t quite get it going, but I was still hanging in there. I had a good opportunity at 10, just missed it. And I hit a poor tee shot on 11, which cost me a bogey. By then, I looked up and Vijay’s at 21 or whatever he was at that point and it was like almost over.”

Singh holed putts from everywhere and lost track of his score until it was time to sign his card. His 61 was his lowest score by two shots on the 50-and-older circuit.

“I really didn’t think I had any chance,” Singh said.

Singh said he saw a leaderboard around the 13th hole that showed him tied for the lead, and he poured it on. He punched a wedge under the trees to 30 feet and holed the birdie putt on the 16th, rolled in a 25-foot birdie putt on the 17th and was on his way.

Singh finished at 22-under 262 to win by four shots over Petrovic, who started the final round one shot behind McCarron and closed with a 70.

The 55-year-old Fijian won for the third time this year and finished at No. 4 in the Schwab Cup.

“The way they were scoring all week, I thought if I got to 20 (under), I might finish top 5,” Singh said. “I birdied the first two, hit it close at 4. I just kept going. I didn’t think about much. I didn’t even know what we were shooting.”

Singh missed only one green in regulation.

Langer capped off another remarkable year for a 61-year-old German with an ageless game. He only won twice, his fewest since 2015, but was runner-up six times.

Wes Short had a 69 and tied for third with McCarron.

“To look at the start of the year, if you would have said, ‘Hey, with nine holes to go, you had a chance to win the Schwab Cup,’ I’d say, let’s go, let’s take it,” McCarron said. “Unfortunately, I’m a little disappointed in the way I performed today.”

After setting the course record on Saturday with a 61, Canadian Stephen Ames slipped three spots into a tie for 5th with a final-round 72 (+1).