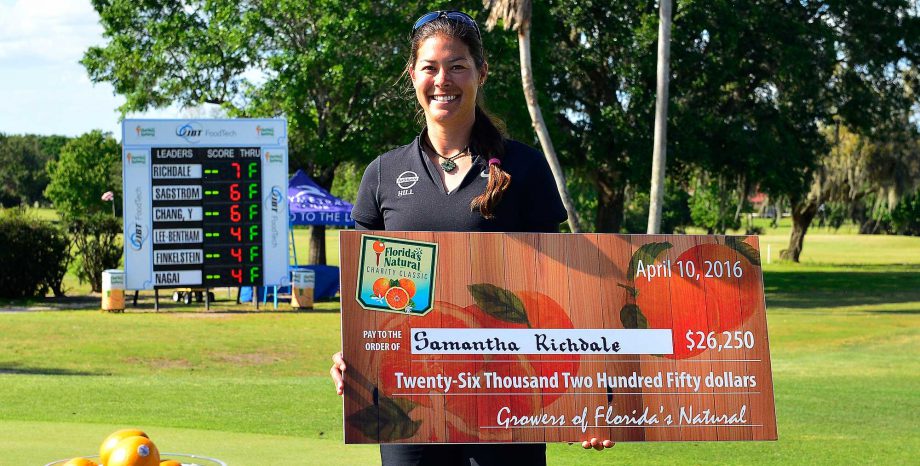 “I’m very excited,” said Richdale, who last won on the Symetra Tour on August 23, 2009 at the Turkey Hill Classic in Harrisburg, Pennsylvania. “It seems like forever the last time I won so this is a big day for me.”

Richdale, 31, started the day with two pars and then made bogey on the third. She responded with birdies on the fourth and sixth holes and made the turn at 5-under, two shots off the lead held at the time by Kana Nagai (Tokyo, Japan). As Nagai began to fade with bogeys on 11, 14 and 15, Richdale took control. She made birdie on the par-5 13th and then chipped in for birdie from left of the green at the par-4 14th to take a two shot lead. She tripped up on the par-3 15th by missing the green right, but closed with three pars.

The pair didn’t make it easy for Richdale down the stretch. Sagstrom birdied 11, 13 and 14 and got within one of Richdale when she bogeyed the 15th. Chang had a 25-footer for birdie on the 18th to tie and nearly rolled it in.

“I was thinking about missing my flight to Hawaii so I wasn’t really paying attention,” said Richdale of Chang’s final putt. “I really grinded and they played really well so it pushed me to play a little bit better.”

Richdale had a flight to Los Angeles tonight to go play in the LOTTE Championship on the LPGA this coming Wednesday. She wasn’t able to make the flight and is undecided on whether she will try to get a different flight to Hawaii or play in Fort Myers next week on the Symetra Tour.

“My ultimate goal is to get better status on the LPGA,” explained Richdale, who has partial status based on her T41 finish at LPGA Qualifying Tournament in 2015. “At this point, I’m not sure of my plans so I’m thinking about going to Gary’s Oyster Bar for a celebratory dinner.”

Richdale is now second all-time in career earnings on the Symetra Tour.

“I just tried to stay calm out there and have fun and take it one shot at a time,” said Richdale. “I really committed to playing my game and hitting my shots and it worked.”

Team Canada Youtn Pro Squad member Rebecca Lee-Bentham of Toronto finished tied for 4th after a final round 69 left her at 4-under for the championship.

The Symetra Tour heads to Fort Myers for the third annual Chico’s Patty Berg Memorial from April 14-17 at Cypress Lake Country Club. It’s a joint event with the Legends Tour.