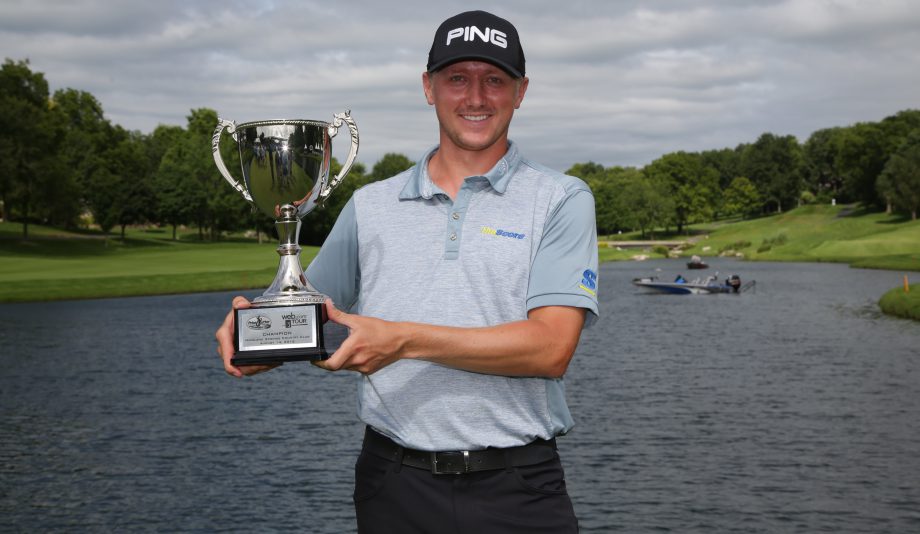 “This is the hardest day of my life,” said Hughes, who earned $121,500 for his effort at Highland Springs Country Club. “I’m so proud of the way I hung in there. I had to dig so deep. The thoughts were going crazy in my head.”

“Trying to quiet that down was the greatest challenge I’ve had in my life.” continued Hughes. “I kid you not, there were so many times I thought about the outcome and what it could mean to my family and everything like that. I had to bring myself back so many time. I just wanted to get across the line and it feels so good.”

Hughes moves from No. 88 to No. 14 on the money list virtually assured of securing one of the 25 PGA TOUR cards awarded at the conclusion of the WinCo Foods Portland Open presented by Kraft Heinz.

“That’s silly talk right there,” said Hughes, who was endanger of heading back to Q School before his victory in Springfield. “PGA TOUR? Let’s go. It’s exciting.”

Hughes knows what it takes to win. He took home the trophy at the Cape Breton Celtic Classic in 2013 on Mackenzie Tour – PGA TOUR Canada. The Hamilton, Ontario native also finished No. 1 on the Order of Merit and earned Freedom 55 Financial Canadian Player of the Year honors that year.

Werenski did his best to force overtime. He eagled the final hole and posted 23-under which tied Hughes for the lead.

Hughes opted to layup on the par-5 and was left with 108 yards for his third. He stuffed his approach to within a foot of the hole to answer Werenski’s effort.

“That is the moment of my career so far,” said Hughes. “There were some moments where I need to hit a shot and I needed to make a putt.”

Before his victory on Sunday Hughes’ plans were to try and regain his Tour card through Q School in December. The former Kent State University standout is also getting married to his fiancé Jenna Shaw on October 22nd and wasn’t sure when the two would be able to go on their honeymoon this fall before his maiden Tour win.

“When I think about what it means and everything that comes with this win, it just blows my mind,” Hughes said.

A 2-under day landed Hughes’ Young Pro Squad teammate Albin Choi of Toronto in a tie for 22nd at 14-under, while Langley, B.C., natvie Adam Cornelson finished the event T71.