Canadian golfer’s trip of a lifetime 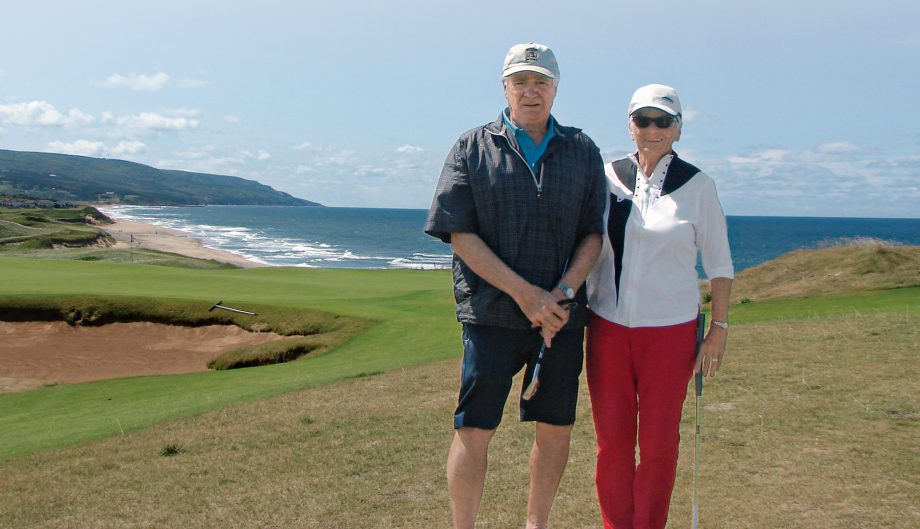 A year ago, Bob Thompson and his wife, Lynn, began discussing a 2017 trip to celebrate their 50th wedding anniversary. Living in Sundre, Alta., travelling to Atlantic Canada was something the couple had been eager to cross off their bucket list. It was a long way from home but for pure pleasure and personal reasons they always dreamed of getting to St. John’s, N.L., Halifax and Pictou, N.S., among other places.

Then last fall, Thompson was alerted that he was the lucky winner of Golf Canada’s inaugural East/West Contest, for which he received a grand prize package that included four nights of accommodation, air travel and car rental. And, of course, golf.

His choice of a round at either Banff Springs Golf Course in Banff, Alta., or Cabot Links or Cabot Cliffs in Inverness, N.S., was an easy one. With Fairmont Banff Springs just a couple hours southwest from Sundre, and having already played the Stanley Thompson gem a handful of times, the retired IT worker mapped out a dream vacation to Canada’s east coast.

“Cabot is so far away from here that, other than looking at the Canadian golf course rankings, you don’t think too much of places like that,” Thompson explained.

From late August to early September, the Thompsons’ eastern escape finally came to fruition. They bookended their trip as desired with stops in Newfoundland and around Nova Scotia but, for a golfer who typically plays his home track of Sundre Golf Club three to four times a week, Bob was anxious to get on the tee at the two Cape Breton beauties.

“It was breathtaking,” he said. “As far as the views from some of the fairways, I had a hard time keeping my mind on the task of golfing. The scenery was just outstanding, and that’s probably because if you’re landlocked like we are (in Sundre), you don’t get to see the ocean.”

Though the contest prizing included just one round at either the Links or Cliffs course, Thompson wasn’t going to venture across the country without experiencing both acclaimed tracks, which are ranked Nos. 1 (Cabot Cliffs) and 3 (Cabot Links) on SCOREGolf’s list of Canada’s Top 59 Public Golf Courses. Despite the slightly lower ranking Thompson found the Links layout, with its firm and fast greens and rugged fescue, to be a little more challenging and enjoyable. Meanwhile, the incomparable views and stunning scenery of the Cliffs course were not enough to offset the 72-year-old’s fatigue from walking up and down the imposing fairways.

Not even Mother Nature could spoil the memorable outing for the Thompsons, who got rained out halfway through their first day at the Links before getting back out a couple hours later. Instead, they were treated to the vacation of a lifetime simply by inputting scores into Golf Canada’s Score Centre. Each round logged this season, up until October 31, counts as a contest entry for this year’s draw, which takes place November 10, 2017.

Up for grabs is a once-in-a-lifetime retreat to either The Links at Crowbush Cove in Morell, P.E.I., or Fairmont Chateau Whistler in Whistler, B.C., with the prize trip to be fulfilled in the 2018 season. Bob Thompson wasted no time making his choice and has no regrets about the decision either.

“Seeing Peggy’s Cove would rank No. 2 to seeing both the Links and Cliffs. Being a golfer, nothing compares to being there and golfing there,” he concluded.

This article was originally published in the Fall Issue of Golf Canada Magazine. Click here to view the full magazine.