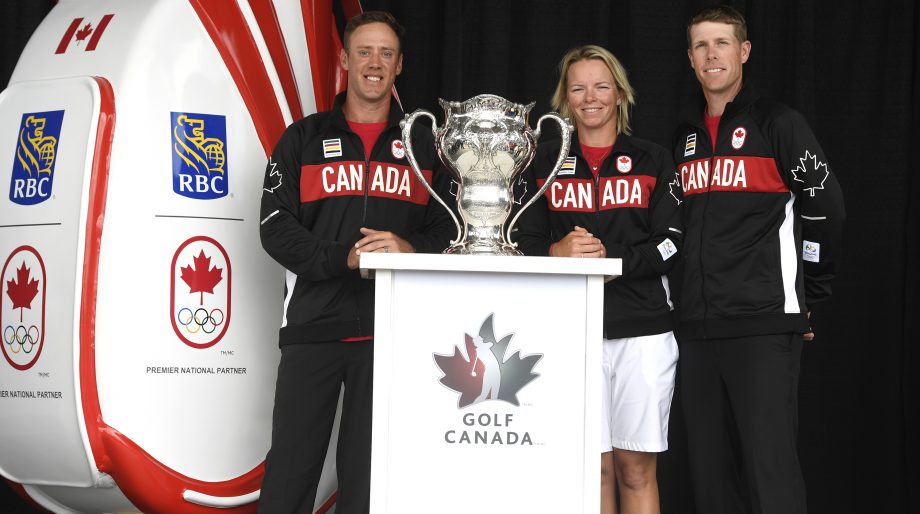 OAKVILLE, Ont. – There was a time when Graham DeLaet thought he would never be able to represent his country on the Olympic stage.

Now DeLaet will be part of a Canadian team brimming with potential when golf makes its Olympic return at the Rio de Janeiro Games following a 112-year absence.

“Up until a few years ago I never really thought I’d ever have the chance to be an Olympian,” said a smiling DeLaet, who recently shaved off his trademark beard so he could better cuddle his newborn twins. “Even just saying that and the closer and closer we get to Rio the more it’s kind of sinking in. It’s a pretty special opportunity, there’s no question.

“Both David and I and Brooke and Alena, we want to bring back some hardware.”

Hearn, DeLaet and Sharp were present for Tuesday’s announcement, with chef de mission Curt Harnett giving them their Olympic jackets. Henderson, who was in Calgary for a junior event, participated in the ceremony via teleconference and was given her jacket by Olympic ski-cross racer Brady Leman.

Golf was played at the 1900 Paris Games and again in St. Louis in 1904. It was supposed to be an Olympic competition at the 1908 London Games, but when organizers couldn’t agree on the format of play it was dropped from the slate of competitions, not to reappear for over a century.

All of DeLaet’s teammates agreed that the return of golf to the Olympics presents a unique opportunity for them to play on a new, higher level. The newly minted Olympians described it as a chance to elevate the sport’s profile in Canada.

“Growing up you watch the Olympics and being into golf, there was no chance to be an Olympian,” said Sharp. “When it was announced it was something very important to me to be able to represent Canada and go down to Rio.

Men’s individual golf and a team event were held in 1904, with George Lyon of Richmond, Ont., winning gold, meaning Canada has technically been the defending champion for 112 years. The engraved, sterling silver trophy from the 1904 Olympics is still kept by Golf Canada at its headquarters in Oakville and on Tuesday it was brought on stage for the golfers to pose with.

“The fact that we are defending gold medal champions is a neat piece of history that Canada can be proud of,” said Hearn. “Graham and I are going to try and go down there and defend on the men’s side and Brooke and Alena are going to do what they can to bring home a medal for the women.”

It will be a somewhat depleted field for the Canadian men, as the top four players on the PGA Tour – Americans Jason Day, Dustin Johnson, Jordan Spieth and Great Britain’s Rory McIlroy – have all dropped out of the Olympics over health concerns, including the Zika virus. Hearn is No. 130 in the world, while DeLaet is ranked 140th.

Henderson is world No. 2 among women, while Sharp is 85th.

All four Canadian golfers say they are willing to take the risk of being exposed to the mosquito-borne Zika virus, which can lead to birth defects.

“I think part of being Canadian is having that pride,” said DeLaet, to a round of applause from fans assembled at Glen Abbey Golf Club to watch the qualifying rounds of the PGA’s Canadian Open. “It should be a privilege to represent your country, not a chore. I wouldn’t have missed it for anything.”

DeLaet, whose wife gave birth to twins eight months ago, says his family doesn’t plan on having more children. Hearn is already a father, while Sharp believes the risk is minimal for a variety of reasons.

“The cases have decreased by 85 per cent, I think you can contract Zika in Florida too. It’s not a big issue for me,” said Sharp, who also said that the COC and the International Golf Federation have regularly updated the golfers on the virus. “Of course I’m going to be careful, I’m going to put bug spray on and probably wear long sleeves but I think I’m going to wear shorts.

I want to be part of the team & really be the proud Canadian competitor cheering on the other athletes – @AlenaSharphttps://t.co/l7Dxge4aU3

I’m excited about the opportunity & I’m very proud to be representing #TeamCanada at the Olympics – @HearnDavidhttps://t.co/UmJzlmpfTt