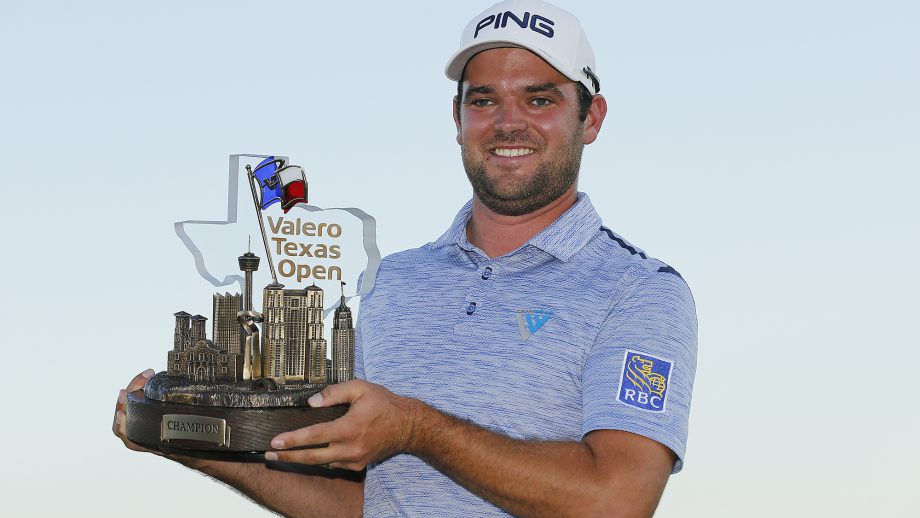 SAN ANTONIO – Canadian Corey Conners claimed his first PGA Tour victory and earned an invite to the Masters on Sunday, winning the Valero Texas Open less than a week after qualifying.

Conners only entered the tournament field Monday, and he’s the first golfer to win on the PGA Tour after qualifying on a Monday in nine years. He made three birdies in the final five holes, shooting a 6-under 66. He was 20-under for the tournament, winning by two shots over Charley Hoffman.

Next stop for Conners: Augusta, Georgia, for next week’s Masters.

Ryan Moore closed with an 8-under 64, a shot off the course record, and was third at 17-under.

Si Woo Kim, The Players Championship winner in 2017, led the opening three rounds but dropped to a tie for fourth with Brian Stuard (15-under) after an even-par 72.

Conners, the 2014 U.S. Amateur runner-up, will play in his second Masters. Two of the top three finishers last year at Augusta missed the top 10 this week. Rickie Fowler was tied for 17th while 10 strokes back at 10-under with a final-round 69, and Jordan Spieth (72) was 7-under.

Incredible performance from @coreconn. What a battle, and what a champion ??? pic.twitter.com/PnembdLq9q

Stuard finished with 66 to get to 15-under. Kevin Streelman closed with an 8-under 64 and was 14-under. He missed tying the course record when, after four-straight birdies, he hit his approach from the 18th fairway into the gallery and bogeyed.

It was a wild round for Conners, a native of Listowel, Ont., who had not won on any of the PGA Tour’s affiliated circuits. He had 10 birdies and four pars that sandwiched four consecutive bogeys on the front nine.

He had a one-stroke lead when he rammed home a 34-foot birdie putt at No. 12, and stayed a stroke up with a tap-in birdie at the 14th.

Moore joined Conners at the top of the leaderboard with an 8-foot putt at No. 16 that was his fourth birdie in five holes.

Moore missed a birdie opportunity on the next hole when he couldn’t convert on a putt from inside 10 feet. Minutes later, Conners sank a 10-footer to save par at No. 15, then hit to four feet to set up a birdie at the 175-yard par-3 16th. His birdie at No. 17 gave him a three-shot lead walking up the final hole.

Conners looked like he would tuck this one away early. He birdied four of the first five holes at TPC San Antonio. Trailing by a shot going in the final round, he benefited from a three-stroke swing on the leaderboard on the third hole with a 10-foot putt on the par-3. Kim hit into the water fronting the green and double-bogeyed. Later in the day, Kim was grabbing at his right upper body with an apparent injury.

Conners was two strokes ahead, and with birdies on the next two holes he led by four over both Kim and Hoffman.

But Conners bogeyed the next four, and three of those came after tee shots put him in nice position either from the middle of the fairway or close to it.

It was only a matter of time! @coreyconners, your latest Canuck to win on the #PGATOUR with a victory @valerotxopen! Canada and hometown Listowel couldn’t be more proud ???? – Next stop, @themasters!

The other bogey, on a par-3 at No. 7, he hit his tee shot into a bunker, then blasted over the green.

He made the turn and clicked off three consecutive birdies. The last player to qualify on Monday and win a PGA Tour event was Arjun Atwal in 2010 at the Wyndham Championship. That was the first time it had been done in 24 years.