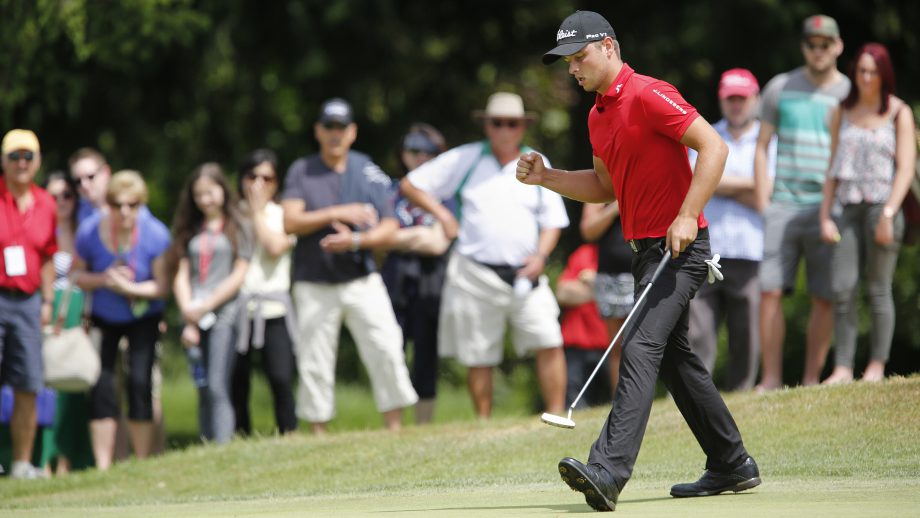 NASHVILLE, Tenn. – Adam Svensson made a spectacular effort during the final round of the Nashville Golf Open Benefitting the Snedeker Foundation but a dramatic day saw him finish tied for fifth.

The Surrey, B.C. product started the day off strong firing six consecutive birdies, trading spots for the lead throughout the day.

Running up the leaderboard like …@AdamSvensson59 shares the lead @NashGolfOpen after making six straight birdies on the front nine. pic.twitter.com/oksdED1ucj

By the 15th hole, Svensson was co-leading with four other players but Australian Cameron Davis’ spectacular back-nine would push Svensson to end the tournament tied for fifth, only two-shots behind Davis at 16-under.

Seeking his first Web.com Tour title, Davis rolled in a 3-foot birdie putt on the 72nd hole to win the third annual Nashville Golf Open Benefitting the Snedeker Foundation by one stroke over Kevin Dougherty, Josh Teater and Lanto Griffin.

Davis essentially came out of nowhere to earn his maiden Tour win, in just his fifth start of the season. The Sydney native entered the final round six strokes off the lead. Davis opened with six pars before recording back-to-back birdies. As Davis made the turn there were eight players higher than him on the leaderboard. The 23-year-old quickly ascended up the board with birdies at 11, 13 and 15.

Typically, when players are thrust into contention there is a tendency to tighten up. If Davis was nervous coming down the stretch, the patrons couldn’t tell. Davis birdied the tricky par-3 17th and then went for the green-in-two at the par-5 finishing hole. Just short of the green in two, he pitched his third 4 feet past the hole. When he knocked in the birdie try, Davis’ name was sitting alone at the top at 18-under-par.

“I kept on holing putts even when the pressure was on, which is a big improvement for me,” said Davis, who had 25 putts on Sunday. “It’s nice that I could get it done under pressure. There were nerves out there, I didn’t know the exact situation, but I knew I was up there and to make a few putts is really nice.”

Davis’ victory in Nashville was eerily similar to his triumph at the Emirates Australian Open last year. Starting the final round six shots back of overnight leader Jason Day, Davis fired a 7-under 64 to win his first professional title on the ISPS HANDA PGA Tour of Australasia. While Davis will never forget his first victory, the success he enjoyed in the Music City gets him closer to accomplishing his goal.

“It’s hard to compare,” said Davis. “The Aussie Open was fantastic, it was my first win and such a big event, but getting it done on this Tour, gets me toward the PGA TOUR. It’s good to get a win out here and it means a lot.”

Davis began the season with conditional status after a T113 performance at Final Stage of the Web.com Tour Qualifying Tournament last December. Davis’ game has been heating up in the month of May. After a 72nd place at the Panama Championship, Davis didn’t get another start until the North Mississippi Classic. A T17 in Oxford helped the 2017 Emirates Australian Open champion move up in the reshuffle. Davis took advantage of the opportunity to play more with a T4 at the Knoxville Open two weeks ago. The win on Sunday was worth $99,000 and moved him from No. 72 to No. 14 on the Regular Season money list.

“I’ve been trending upwards over the last couple of weeks,” said Davis, who notched win No. 54 for Australia on the Web.com Tour. “I’ve gone from having no status to have enough status to play events and now winning one. It’s been a pretty steep rise over the past month or so. I mean, it’s just a lot of relief to know I’ve gotten over the line and now looking forward to the rest of the year, because obviously I’ve moved up the money list a bit and have a few more opportunities coming my way.”

One of those opportunities is the Memorial Tournament presented by Nationwide. Davis will compete alongside Tiger Woods, Rory McIlroy and fellow Australians Marc Leishman and Jason Day. Davis is well aware of how big the stage is but is excited about the challenge Muirfield Village Golf Club presents.

“It’s going to be a completely different golf course,” he said. “The field is full of the top players in the world. I can’t tell you how I’ll feel until I actually get out there to play a PGA TOUR event, but it’ll be awesome to be out there.”

* Kevin Dougherty closed out the week with his best round of the tournament – a Sunday 66. The 27-year-old from Murrieta, California made a valiant charge down the stretch, making birdie on four of his closing six holes to miss out on a playoff by just one stroke. The back-nine was good to Dougherty this week, playing it in 18-under with just a single bogey.

* Josh Teater was mere inches away from forcing a playoff with the Aussie. After electing to lay-up on the par-5 closing hole, the Danville, Kentucky native hit a lackluster approach shot from the fairway that put him 20 feet away from the cup. It wasn’t meant to be for Teater as he watched his putt narrowly slide by. After a bogey on 10, the Morehead State University alum birdied 11, 13, 15 and 16 to draw into a tie for second.

* Brad Hopfinger made a Sunday charge. Coming into the final round seven strokes off the chase, Hopfinger erased the deficit with a 15th-hole eagle and held a share of the lead. Failing to hit the green on the par-4 16th would put a damper on the University of Iowa alum’s comeback chances, giving up a stroke before closing pars on 17 and 18.