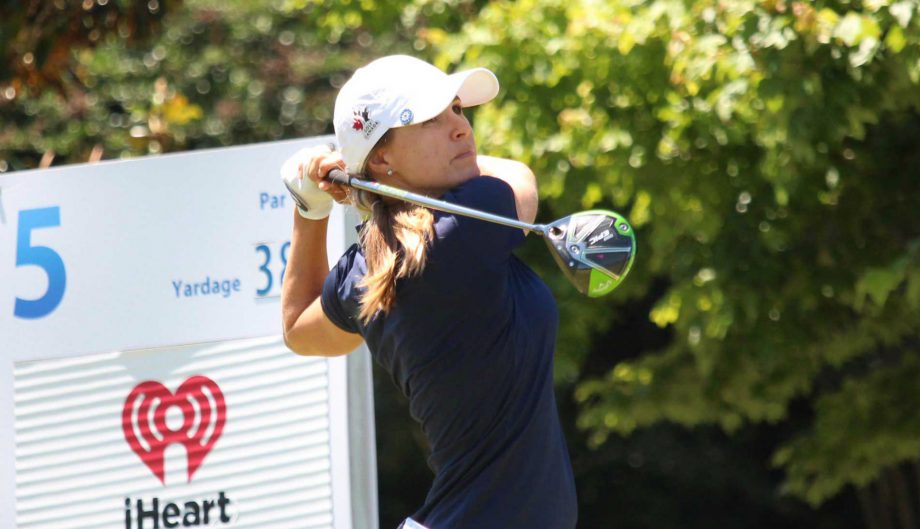 Quebec City native Anne-Catherine Tanguay, moved into first place on the Symetra Tour’s Volvik Race for the Card after a third place finish at the Self Regional Healthcare Foundation Classic at The Links at Stoney Point.

Tanguay finished at 9-under par, one stroke behind winner Celine Boutier of France, who defeated Columbia’s Paola Moreno in a playoff.

After taking the 36-hole lead, thanks to a bogey-free 65 on Friday, Tanguay carded an even-par, 72, Saturday and was two strokes behind Moreno the 54-hole leader heading into the final round.

Tanguay, a member of the Team Canada Young Pro Squad, made the turn Sunday at 1-over par for the round, after two bogeys and one birdie on the front nine.

She birdied the tenth hole, but then made back-to-back bogeys on 12 and 13. After another birdie on 15, Tanguay was 9-under par heading to the par-5 18th.

On the 72nd hole, Tanguay was one stroke behind Boutier and Moreno, and had the chance to move to 10-under par after her 3rd shot from the bunker set up a birdie putt. She came up short and finished at 9-under par.

Moreno and Boutier both parred the 18th, setting up a sudden-death playoff, replaying the 18th hole. Boutier birdied the first playoff hole, to win her first career Symetra Tour event.

Tanguay has been a model of consistency in 2017. Her third place finish was her 5th top-10, and fourth top-5 of the season in six starts. She has yet to finish outside of the top-15 in any of her starts this year.

NEW #1 on #VolvikRace for @LPGA is @ACTanguay??! Her finishes this year…

Fellow Young Pro Squad member, Augusta James, Bath, Ont., finished T11, after carding a 1-over par, 73, on Sunday. James’ 11th place finish was her second best result of the season. She is looking to improve on her 12th place finish in the Volvik Race for the Card last season.