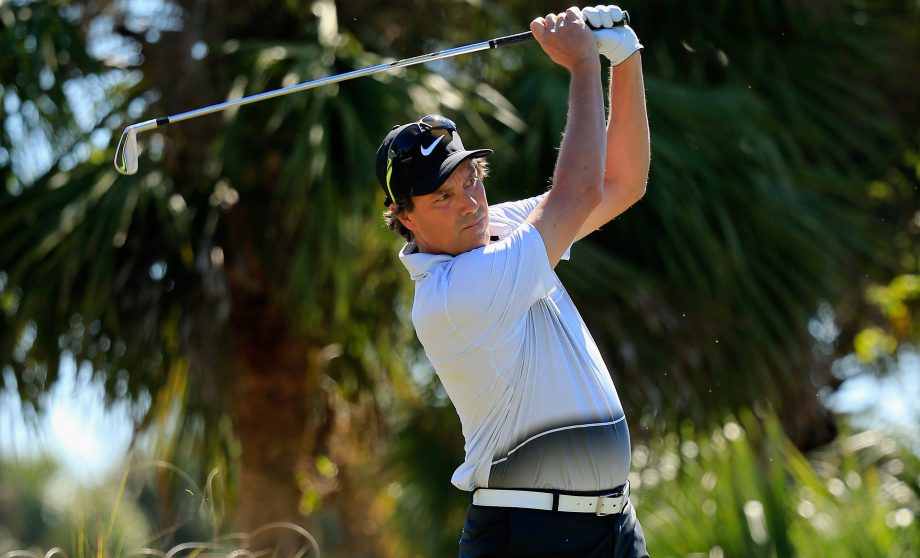 The 54-year-old Sauers two-putted for birdie on the par-5 18th for a 5-under 67 and a two-stroke lead over Joe Durant. The three-time PGA Tour winner had a 12-under 132 total at TPC Snoqualmie Ridge.

“I just concentrated on hitting the ball solid, trying to keep it in the fairways and give myself opportunities just like I try to do every week,” Sauers said. “I had opportunities to make the putts and I made a few today, missed a few. I made a couple of stupid bogeys.”

Sauers birdied four of the last five holes, making three in a row in Nos. 14-16.

He’s playing through tendinitis in his left wrist.

“Coming in this week I was not too confident,” Sauers said “I played one time at home because of my wrist and trying to heal it. I didn’t know what to expect coming into this week. But I just won the U.S. Open prior to that, so that kind of builds confidence.”

The U.S. Senior Open victory capped a comeback for Sauers, 10 years removed from nearly dying. He was incorrectly diagnosed with rheumatoid arthritis, spent seven weeks in the hospital and was given a 25 percent chance of survival. Eventually, he was diagnosed with Stevens-Johnson syndrome, a disorder of the skin and mucous membranes that causes the skin on the extremities to burn from the inside out.

Durant birdied the last for a 65.

“It’s pretty generous off the tee, but you’ve got to hit good iron shots and I typically am a pretty good iron player,” Durant said. “You’ve got to manage your game a little bit around here. You’ve got to pick your spots because they can put some pins in some corners and greens get firm, you can go through some of the greens pretty easily. Or if you put them in the green-side bunkers, you’re begging for mercy.”

He won the 3M Championship three weeks ago in Minnesota.

Tom Byrum and Calgary’s Stephen Ames were 9 under. Byrum had a 68, and Ames shot 69.

Kirk Triplett, tied for the first-round lead with Sauers after a 65, had a 71 to drop into a tie for fifth at 8 under.

Bernhard Langer also was 8 under after a 67. The 58-year-old German star won the 2010 tournament and finished second behind Billy Andrade last year. Langer has three victories this year, two of them majors.

John Daly was tied for 29th at 2 under after his second 71. He has three top-20 finishes in 10 PGA Tour Champions starts since turning 50, with the best a tie for 11th last month in the Dick’s Sporting Goods Open in New York. Last week, he tied for 51st in the Czech Masters.

Local favorite Fred Couples is sidelined by back problems.