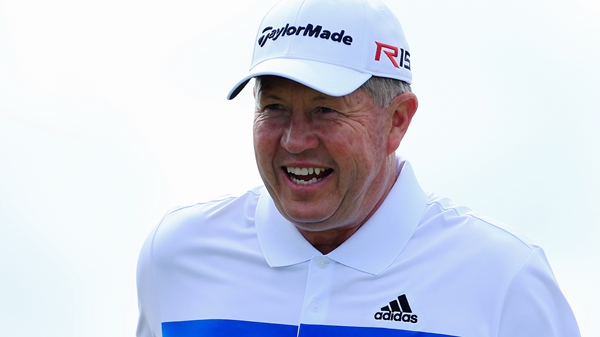 BOCA RATON, Fla. – Bart Bryant holed out with a 6-iron from 195 yards on the par-5 18th hole Saturday for the first double eagle on the Champions Tour since 2010, giving him a share of the second-round lead in the Allianz Championship at Broken Sound.

Bryant had bogeyed four of his previous seven holes to fall off the pace before his second shot at the 509-yard 18th hole landed on the front of the green and rolled into the hole for his first career albatross.

Playing in the final group, Bryant finished with a 3-under 69 to join Paul Goydos, Tom Pernice Jr. and Canada’s Rod Spittle atop the leader board at 9-under 135. Spittle had a 66, and Goydos and Pernice shot 69.

“I was going to hit a 5-iron, but I thought if I got the 6-iron high enough it would just clear the bunker,” Bryant said. “I never saw it go in. That sure made up for a lot of bad shots.”

Keith Fergus was the last player to make a double eagle on the 50-and-over tour, accomplishing the rare feat in the 2010 SAS Championship. After Bryant’s heroics, Goydos and Pernice made birdies at the 18th hole to make it a quartet at 9 under.

“It was cool to see, but it was kind of eerie afterward,” Goydos said. “It kind of took the air out of the tournament. It was like a bomb got off and we got the crater.”

Spittle, who had to make a 5-foot par putt on the 72nd hole of Q-school last fall to keep his card, birdied five of his first seven holes to charge into contention. His lone blemish was a bogey at the par-5 11th. “I’ll save the heroics for tomorrow,” Spittle said.

Twelve players were within three shots of the lead. Interestingly, even though Bryant made a double eagle on the last hole to move into a first-place tie, he will tee off in the next-to-last group in the final round.

Stephen Ames is tied for 24th, six-shots off the lead at 3-under.