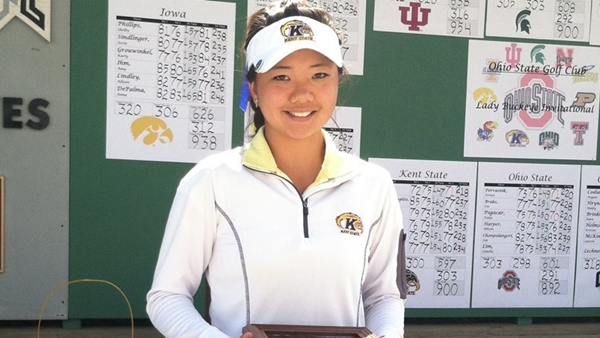 Ha, a junior at Kent State, grabbed a share of the lead with Kent State teammate and fellow Canadian Josée Doyon of St-Georges-de-Beauce, Qué., following Friday’s opening round.

Ha maintained her advantage by shooting a 3-over 75 Saturday. On Sunday, the Calgary native slammed the door on the competition by firing a final round 71, her best score for the tournament. She finished with a 2-over par 218.

Doyon faltered down the stretch, falling to a tie for 10th place after going 79-77 to close out the tournament.

Collectively, the Kent State Golden Flashes lost their second round lead to the Ohio State Buckeyes, who closed with final round of 291, the lowest score for any team through three days of competition. The Golden Flashes finished in a tie for second with Michigan State, eight strokes back of the host Buckeyes.

Kent State will look to build off this performance as they head into the Mid-American Conference Championship this upcoming Friday.