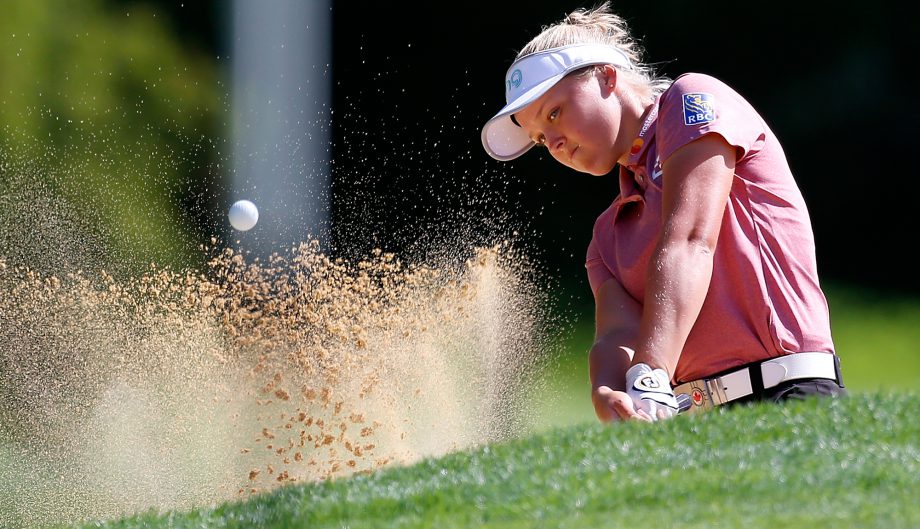 PORTLAND, Ore. – Two-time defending champion Brooke Henderson of Canada shot a 5-under 67 on Friday for a share of first place after two rounds at the Cambia Portland Classic.

The 19-year-old from Smiths Falls, Ont., fired six birdies and an eagle to jump up the leaderboard from second to first place, where she was tied with first-round leader In Gee Chun of South Korea and American Stacy Lewis at 10 under.

Chun shot a 68 while Lewis had a 64. The trio have a two-shot lead over Jodi Ewart Shadoff, Moriya Jutanugarn and Ai Miyazato heading into the weekend.

Brooke Henderson’s 2nd consecutive 67 puts her at 10-under and tied for the lead going into the weekend @PortlandClassic.

“It was a little bit up and down today,” said Henderson. “I made a lot of birdies and an eagle, which was awesome, although I made a couple bogeys that I’d like to take off the card for the next two days.

“But overall I feel like I have a solid game plan and any time I’m double digits over two days I’m really happy. So I hope I can continue that trend over the next two days.”

Henderson won the tournament in 2015 and 2016 and is trying to become the first golfer to win at Portland in three straight years.

Alena Sharp of Hamilton was 4 under after a 71 and Maude-Aimee Leblanc of Sherbrooke, Que., had a 73 to sit at 1 under after two rounds.

Henderson eagled on the par-4 11th hole. She also had three bogeys.

“It was pretty cool,” Henderson said of her shot on the 11th. “It was a really tough shot and to see it go in just made me really happy and it changed my day. I was able to go 4 under par after that point which was really important and help me get to 10 under.”