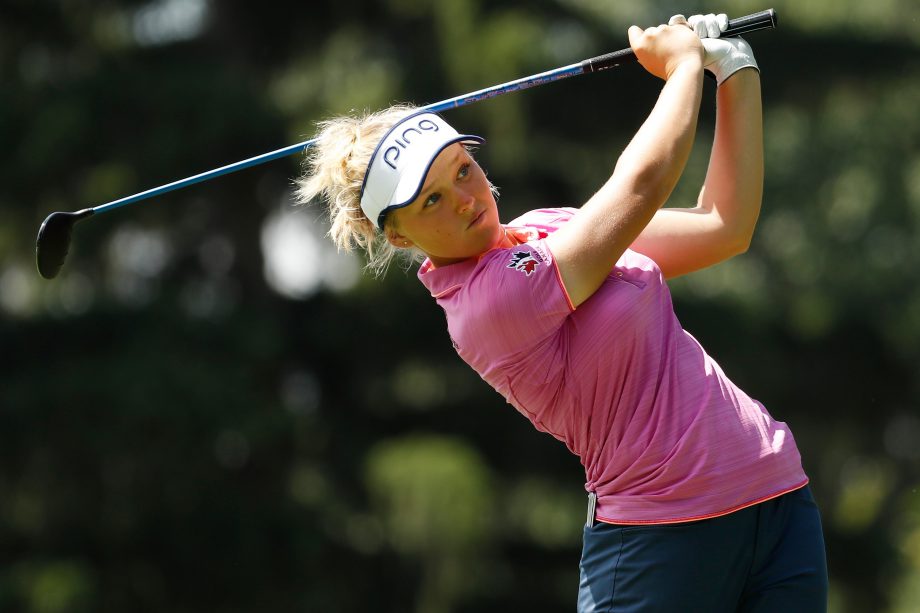 SYLVANIA, Ohio – Hyo Joo Kim bogeyed her final hole Thursday for a 5-under 66 and a share of the Marathon Classic lead with fellow South Korean player Mirim Lee and Japan’s Haru Nomura.

Celebrating her 21st birthday, Kim had four birdies in a six-hole stretch on her second nine at rain-softened Highland Meadows.

“Last night, it was raining, so it’s little bit more softer green,” Kim said through a translator. “I hit good shots, a lot of good shots, good drives, good putts, but on the last hole I missed a putt. … “Best part of game was tee shot, which is driver shot and iron shot. I’m not complaining about any shot today.”

She won the season-opening event in the Bahamas for her third career title.

“It was long time ago, so I forgot kind of what feel it was,” Kim said.

Nomura won the Women’s Australian Open in February for her first LPGA Tour title and took the Swinging Skirts LPGA Classic in April in California.

Ariya Jutanugarn, the long-hitting Thai player who won three straight events in May, was a stroke back at 67 along with American Kelly Shon and France’s Celine Herbin.

“I played pretty good,” Jutanugarn said. “My tee shot was good and I make some putts.”

“Hopefully, I’ll have a few more birdies tomorrow,” Ko said. “It’s a solid start. I’ll take the 3 under today, but I think because of the weather and if there are no thunderstorms the course will probably play drier. That will make it tougher if the greens get much firmer.”

Ko won in consecutive weeks in Southern California this year, the second the major ANA Inspiration. The 19-year-old New Zealander tied for third last week in the U.S. Women’s Open in California.

Henderson is making her first appearance in the event.

“I knew the course conditions were going to be a little bit softer and easier in the morning with the big rain last night and just because it was in the a.m.,” Henderson said. “So tried to take advantage. Unfortunately, dropped a shot on the last hole. Overall, it was a solid day. Got some really good breaks out there and was able to take advantage for the most part when I had an opportunity.”

The 18-year-old Canadian has two victories this year, beating Ko in a playoff in the major KPMG Women’s PGA and successfully defending her title in Portland, Oregon.

Brittany Lang, coming off a playoff victory over Anna Nordqvist on Sunday in the U.S. Women’s Open, had a 70. Nordqvist and Alena Sharp of Hamilton, Ont., also shot 70.

Italy’s Virginia Elena Carta, the NCAA champion this year as a Duke freshman, had a 71 in her first start in an LPGA Tour event. Québec native Anne-Catherine Tanguay matched Carta’s round for a share of 47th.