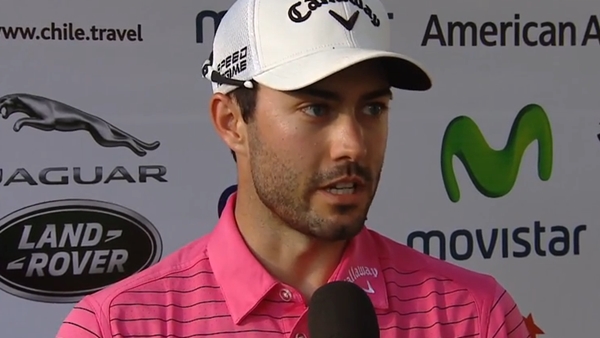 SANTIAGO, Chile – Adam Hadwin of Abbotsford, B.C. fired a 5-under 67 and sits on top a tightly-packed leaderboard at the Chile Classic, the second stop on the 2014 Web.com Tour schedule.

Eight others, including 36-hole leader Byron Smith (75) are three off the pace heading into Sunday’s finale.

For Hadwin, a non-winner in his first two full seasons on the Tour, this week has been about keeping things simple at the Prince of Wales Country Club.

“Some might say I’m a little conservative off the tee than others. I’ve hit a lot of 4-irons off the tees,” he said. “I’m coming into greens with 8-irons or 9-irons instead of challenging it. I haven’t been in too much trouble this week and I feel like I’m starting to play smart golf and play to my strengths.”

Hadwin chalked up six birdies to offset a single bogey and slowly moved into contention as the second-round leaders all struggled to pull away from the field. Only three of the final ten players on the course Saturday managed to break par and the final pairing of Smith and Argentina’s Jorge Fernandez-Valdes both stumbled to over-par scores and dropped in the standings.