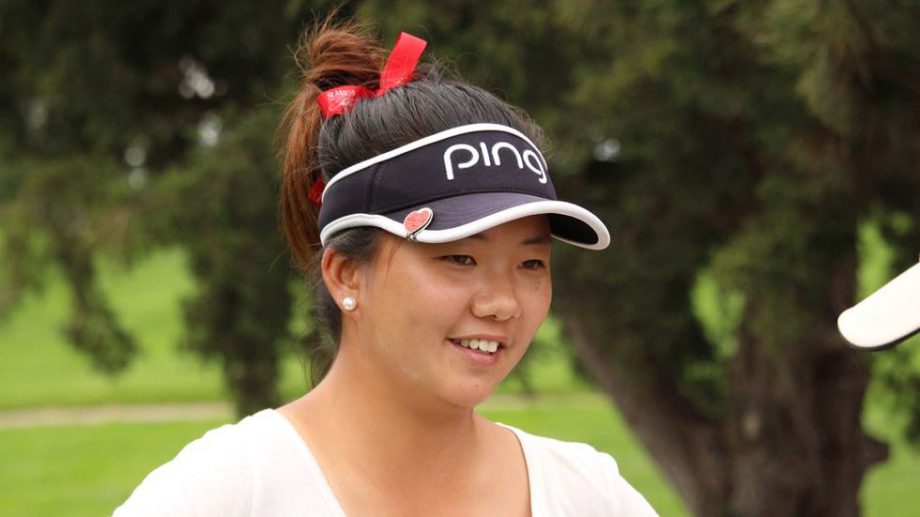 GARDEN CITY, Kansas – Dana Finkelstein (Chandler, Arizona) was using the wrong side of her pin sheet at the start of her round, but she was able to laugh about it after her stellar 7-under, 65 to match the Garden City Charity Classic course record, which was set earlier in the day by Jennifer Ha of Calgary.

Finkelstein and Ha each tallied eight birdies against just one bogey to lead at Buffalo Dunes on Thursday. Olympian Stephanie Meadow (Jordanstown, Northern Ireland) and former LSU golfer Lindsay Gahm (Louisville, Kentucky) share third at 4-under, 68. Last week’s winner, Nelly Korda (Bradenton, Florida), posted a 3-under, 69 and is in a tie for fifth with Michelle Piyapattra (Eastvale, California) and Tracy Stanford (Midland, Texas).

Ha has played the last two weeks on the LPGA Tour during the Canadian swing and used the momentum to post a 7-under, 65.

“In a tournament, this was my best round of the year,” said Ha, who breaks the record shared by Vicky Hurst and Laetitia Beck. “I started off really well with two pars and then three birdies in a row and that kick-started me to a good round today.”

Ha, 22, had to do some scrambling as she hit 9-of-14 fairways, but used a hot flatstick to make up for it. She attempted just 27 putts during her round.

“I hit some errant tee shots today, but I hit a lot of shots inside 20 feet and my putter was working,” said Ha. “When I left myself with 15-20 feet, I was able to make them.”

Ha has played in eight Symetra Tour events this season and has one top 10 finish, a tie for seventh at the FireKeepers Casino Hotel Championship. She posted back-to-back rounds of 69 before the tourney was shortened to 36 holes due to weather.

The former Kent State star spent the last two weeks playing on the LPGA Tour at the Canadian Pacific Women’s Open and the Manulife LPGA Classic. She said she learned a lot and the experience is helping her this week.

“It definitely gave me more confidence going into these rounds thinking that I can play on the LPGA,” said Ha, who missed the cut in both events, but still posted a 71 and a 72. “I played with Maria McBride and she was awesome.

When we talked, she gave me so much confidence and that is what I needed going into this week.

Ha, who was the MAC Golfer of the Year as a junior and First-Team All-MAC as a senior at Kent State, said her first year on Tour has been an adjustment.

“There are so many good players that can shoot 7-under, 8-under every week,” said Ha. “It is definitely hard to keep up.”

Ha ranks 113th on the Volvik Race for the Card money list so her major goal is to play well heading into Stage II of LPGA Qualifying Tournament, which is Oct. 17-23.

She also likes Buffalo Dunes and feels like it suits her game.

“It’s a pretty tough course, the rough is long so if you go in the rough it is penalizing, but thankfully I didn’t,” said Ha. “The greens definitely hold here and I love being able to go at the pins.”